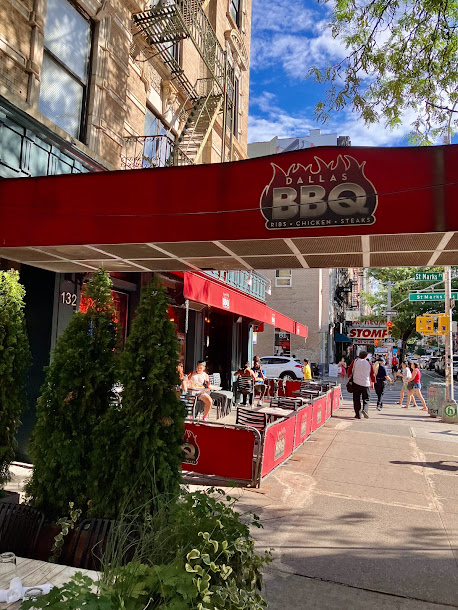 A new bar-restaurant is in the works for 132 Second Ave., the current home of longtime tenant Dallas BBQ at St. Mark's Place.
Hospitality vet Curt Huegel is one of the principals behind this unnamed project. Huegel and company will appear before CB3's SLA committee on Wednesday night for a new liquor license for this address... 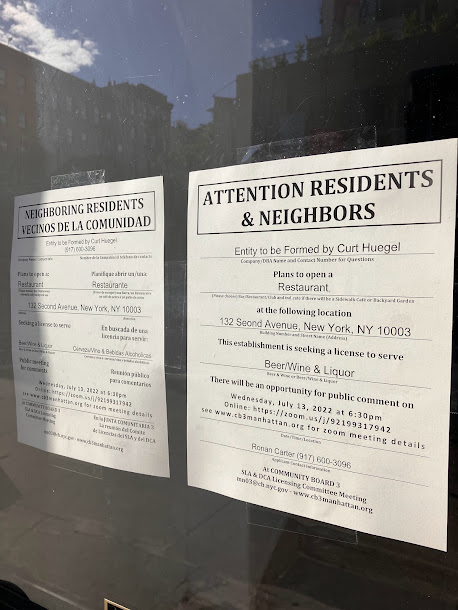 According to the questionnaire on file for public viewing, the restaurant has proposed hours of 11 a.m. to 4 a.m. The menu posted with the questionnaire features a variety of burgers, sandwiches, bowls and salads ... including a weekend brunch service.
Huegel's portfolio includes concepts such as Bill's Townhouse, Campagnola and Printers Alley ... closer to home, he's part of the ownership team at Jackdaw on Second Avenue and 13th Street.
If all this goes through, then this likely means the end of Dallas BBQ — at least at this location. We reached out about a possible closure or relocation.
The family-owned Dallas BBQ has 11 locations in the metropolitan area. The original Dallas BBQ opened on the Upper West Side in 1978, and the EV location debuted in the 1980s (1984?). They have a solid following who enjoy the enormous platters of reasonably priced food (onion loaf!) and supertanker-sized drinks.
There were rumors in 2018 that this outpost would relocate, but management decided to stay put after a few protests from regulars.
The Dallas BBQ on University Place and Eighth Street shuttered in 2007... the original UWS outpost closed in December 2014 — both the result of rent hikes.
Posted by Grieve at 5:20 AM

If anyone reading this lives within 200 feet of this corner either make you concerns, fears know at the CB3's SLA committee on Wednesday night or buy a great pair of noise canceling headphones.

Great. A favorite of working-class people being pushed out by some overpriced clip joint for rich young a**holes.

"part of the ownership of Jackdaw"... oh boy. Good luck to that area if it's anything like Jackdaw. As someone who lives down the street from Jackdaw, all i can say is yikes.

It seems strange to take a legit BBQ restaurant that has always done well and drive it into the ground with yet another burgers, salads, bowls joint.

Ok, that's a shame. Dallas BBQ is a reliable and affordable place and ... has everyone noticed? It is usually full. It serves a need and lots of people.

The staff are always helpful (I have witnessed them have unbelievable patience) and accommodating.

I hope its patrons can make enough noise to get another reprieve.

Perhaps it is simple economics leading to this change and not some huge conspiracy?

This is a shame. Good place for some old-school baby back ribs (and a pretty good burger).

This is so sad. I order takeout from them often and used to go the the restaurant all the time pre-Covid. Their Hennessey and sticky sauced ribs and chicken are so fricken good. Plus their frozen drinks really can't be beat for the price and size, especially now that you can order them to go again. Such a chill old-school vibe. Now it will just be another watering hole for the obnoxious drunk crowd.

Doing BBQ since way, way before it was cool or trendy in the city.

Damn Shame BBQ was a solid spot for all to enjoy some quality guilty pleasures even though it's been decades since i could eat there, it was comforting to know it was there, staff and customers were friendly and polite when navigating the corner with groceries etc...

This operator is part of the problem in the neighborhood, it's gonna be another loud kids bar (til 4am!!) that's only there to enrich the operator adding nothing to the area and taking away a lot like a quiet & peaceful part of a really busy street

from their other endeavors this place will be worse as it seems this operator really has no concerns about the community and neighborhood, carpetbaggers are running amok in the nabe and while we go to cc meetings they seemly are reluctant to stop this madness approving all sorts of operators who time and time again lie to them and get approval then oh we couldn't make enough money doing what we said we would and set about destroying the quality of life for those who live around it in pursuit of $$$$

So now we’ll have a bar til 4 am at this corner, and Stromboli’s on the 1st avenue corner that stays open til 5 am serving cheap beer and cheap wine. Whoever coined the expression “the city that never sleeps “ was way ahead of his or her time. That person just didn’t know that those that would like to sleep no longer have that option.

I love jackdaw, what’s your issue? Way better than Durden…

That whole strip of 2nd Ave is turning into another Hell Square and our community board won’t do a thing to support the quality of life of those they are supposed to represent.

Oh no! Why is it so hard to get a decent barbecue sandwich in this town? I can’t believe Dallas BBQ is on its way out.

Our community board is either on the take, or following our Mayor's policy of turning working class neighborhoods into Manhattan's "night life district" for tourist $. Either way it is detraining the lives of those which call the Lower East Side our home.

Speaking of real-estate interest....
"Neighbor said...
Anonymous Anonymous said...
Funny they are talking about the menu and proposing 4am closing time"

Neighbor don't even deny it, you are either a Libertarian who lives to see the working class suffer at the hands of the real-estate industry or you are employed by the that industry. Every comment you leave is pro-developer, pro-nightlife and pro hospitality industry. I would not be surprised if you work for Carlina Rivera.

Proposed replacement aside, I'm shocked to find people wanting Dallas BBQ to stay. I live steps from it and have to pass that awful, fetid stench of stale, starchy rice and poor excuse for barbeque every day. It's almost as bad as getting a whiff of Subway sandwich "bread" leeching out onto the street. Just bring back affordable Orlin to replace this and we're all good.

I've never known rice to smell much 9:01 a.m., are you sure it is not fetid fries or oleaginous onion rings?

Dallas BBQ stopped being good a REALLY long time ago.

the quality of their food has gone way down. i got sickened twice in a row and stopped going. in addition, they served me stale old cornbread. maybe it's a good time to close up. it happens. a food place that has been around forever starts to go bad because they no longer care.

The LES is being turned into a facsimile of Bleeker St.

Mighty Quinns had been the better bbq for a while now.

It’s not perfect but it’s reliable and moderately priced, it will be a big loss for the neighborhood

Dallas BBQ is simply bad. All EV needs is Mighty Quinn, and that’s still probably too much. Good riddance

Oh you know, probably the overly packed, rowdy, drunk bro's and girls who can't handle their liquor and are screaming with zero regard to the neighborhood at 3am in the morning.

I patronized this Dallas BBQ location for years until an incident that happened about a year and a half ago. I entered the restaurant with a friend, and one of the employees seated us by the window. Then a manager came up to us and asked us why we were seated at the table. I told her another employee had seated us. She didn't believe me. There was only one other table with patrons in the area. She was so rude and then the waiter was rude like they didn't want us to be there. I didn't know what the deal was because I had eaten there for years with no problem, and it was in the middle of a weekday. It was bizarre and so out of character for the place in general. We got up and left. I wrote to the company about the weirdness but never heard back. Maybe these employees didn't like lesbians? Who knows? It was the last time I ate there. I only go to the Chelsea location now.

@Glenn, $22.99 for 10 boneless wings for the working class? Can I have a job?
On the contrary, Jackdaw is reasonably priced and I don’t see one item on their menu over $18. They also offer a very reasonably priced happy hour with wine and cocktails…