A very public eviction for Anwar Grocery on Avenue B 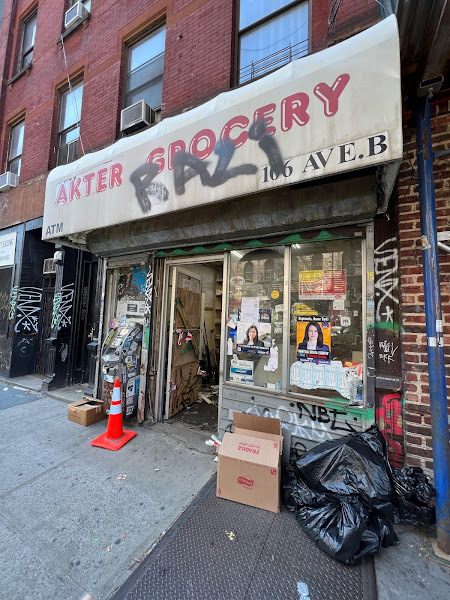 First 2 photos by Miriam Abrahams; the rest by Stacie Joy
On Tuesday afternoon, workers cleared out Anwar (going recently as Akter) Grocery at 166 Avenue B between Sixth Street and Seventh Street... 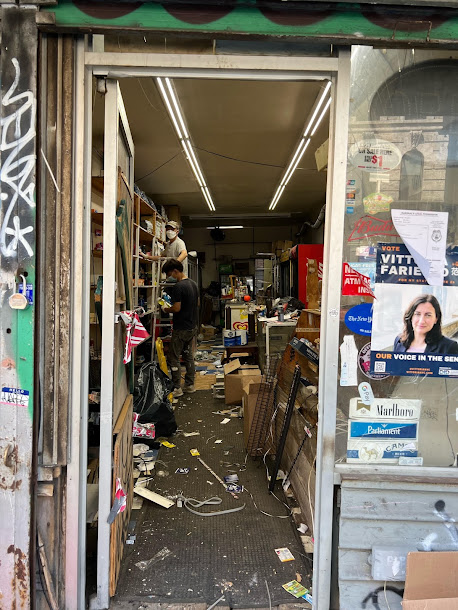 The clean-out preceded a visit by the Marshal, noting the business is now in legal possession of the landlord... (an eviction notice arrived on July 5). 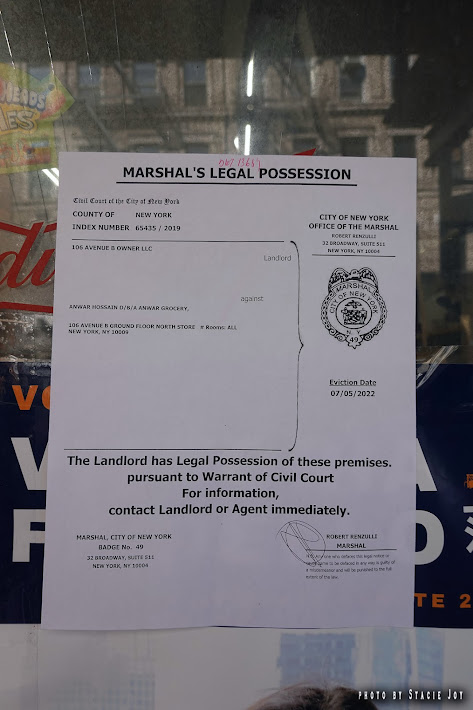 Anwar Hossein had owned and operated the shop since 2005. He and his family have lived in an apartment upstairs dating to 1998. (His father had been a tenant since 1988.)
Hossein previously owned two other stores in the neighborhood — A&H Grocery at 204 Avenue A and Ahn Newsstand and Candy store at 500 E. 12th St., both long shuttered.
He previously told Stacie Joy that things were difficult for the shop in recent years — the pandemic only adding to the woes. A new landlord bought the building in 2018, and his lease expired in December 2019.
There have been multiple court dates between the two sides before Tuesday's action.
This was one of the more public evictions we've seen recently. Workers emptied out the store, placing its contents, including beer, cigarettes, rolling papers and personal-care products, on the sidewalk for passersby to take ... (The Hosseins were not seen during this time, and it's not known what their housing status is.) 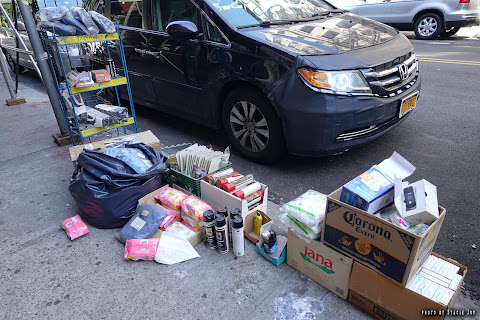 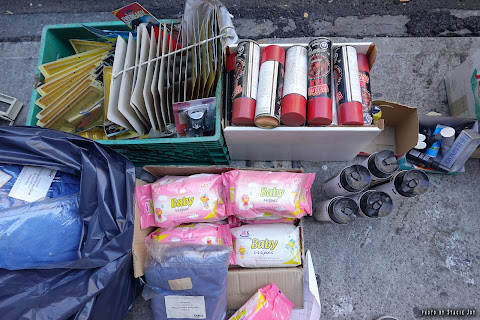 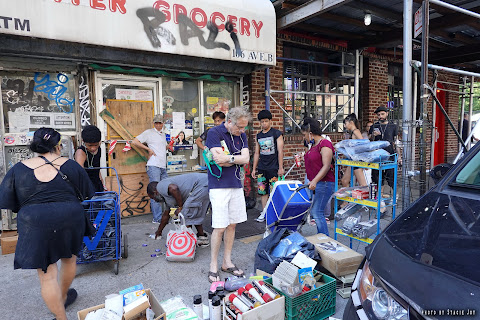 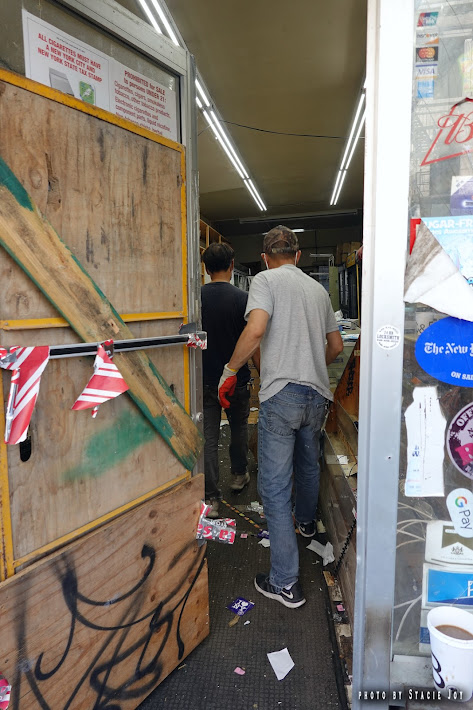 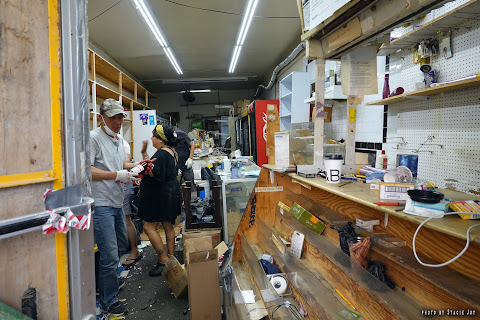 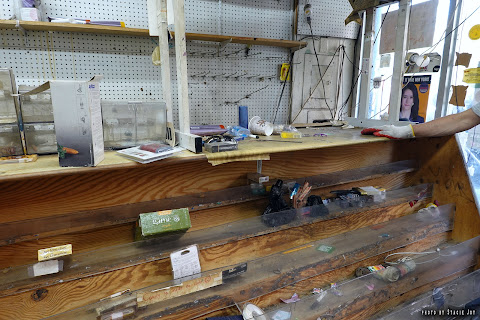 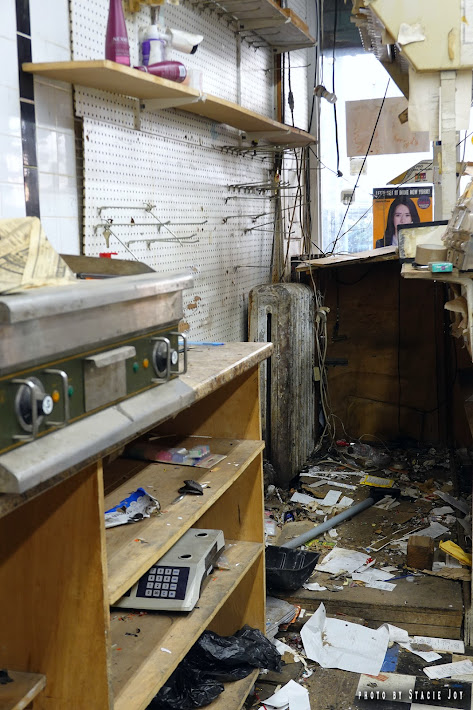 However functional, the more recent delis and groceries have a bland sameness with the ambiance of an airport galleria.
Anwar, with the owners who lived upstairs, was definitely the last of its kind in this neighborhood.
And from this spring... Sheila and Anwar Hossein... 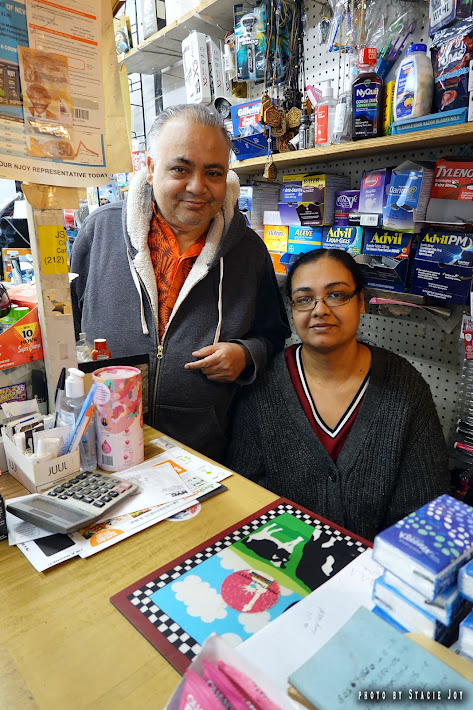 When Cuomo shut down the economy during covid and the city, it destroyed small businesses that can no longer pay their rents along with real estate taxes that landlords pass on to the renters. Unfortunately our mayor doesn't have the foresight to understand blocks of empty retail does nothing positive for the economy of a community and historically results in increased crime.

I'm sorry, but the place was gross.

How terrible that one's life can be so easily dismantled.
Truly horrible.

thank you stacie joy for this photo documentation and EV grieve for the thorough reporting. RIP little grocery of vastly entertaining contents! hope the owners are ok.

Remember when he was shot at their Ave A place and the wife worked in the news stand by the Cock back door? I always got upset with the guys coming out and peeing next to it , especially when she was pregnant. I liked her, she was always really kind.

Sad that it ended like this but I never understood this place. It almost seemed like they didn't want to stay open. Store always a mess, weird selection, stale candy.

Did anyone snag the Nickelback DVD, or can I still grab it?

Corporate ambience is definitely a weak spot among newer corner stores, and so are their prices, but at the end of the day they still provide needed groceries/food in clean stores & put people to work doing it. There are downsides and upsides. You can't entirely fault them for the situation, where the corner shops would stay forever empty otherwise because only corporate stores can afford the sky-high rents being asked by the landlords. At least they mostly know the assignment when they get here (and they don't last long if they don't). I appreciate a professional operation.

The older stores... some are run by amateurs but run quite well! But my sympathy only goes so far. I make it a point to patronize the nearby grocery run by a family, where they have fresh vegetables in good shape & other grocery items at fair prices & they keep the store clean and appealing even if the decor is aged. It's nothing special, but it works! I do not make it a point to buy anything at the glorified lotto/tobacco shop half a block away which is dirty, dingy, sells only sugary drinks & has 25-year-old porn mags on the shelves. LOL I don't care if it's a family operation! If you nasty, you nasty.

This is just philosophical, I can't really say I knew anything about Anwar Grocery. I'm seeing the takes on it are varied.

Regardless of if the shop was nice or not… I still feel bad for the family . Hope they still have apt .

the shop had character- i don’t care if people think it was gross. so now it can be replaced with one of those gas station knock off everythjng costs $9 healthy and fresh bodegas? im sad to see this business go- it was my favorite place to grab a drip coffee

I love to support only the small businesses in the neighborhood and I live down the block and this place is just begging you to never go in there. I was so puzzled by it and how it even managed to last this long being so almost in your face uninviting.

I hope the fam is ok but I never understood how it stayed open. It seemed like the AC never worked and seemed really dingy/dirty and Sunny and Annie’s is just a few doors down and so much nicer.