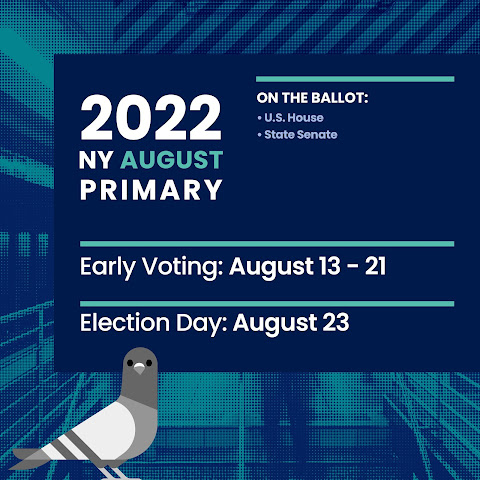 ... New York City Council Member Carlina Rivera leading the Democratic primary field with 17% of likely voters’ suppot. Assembly Member Yuh-Line Niou was second with 14% and former House impeachment counsel Dan Goldman close behind with 12%, while former New York City Mayor Bill de Blasio was in seventh place, with 5%. Some 27% of those polled said they were not sure who they would vote for in the Aug. 23 primary.

Data for Progress polled 533 likely Democratic primary voters in the district between July 7-10.
---
UPDATED 7/19: de Blasio has dropped out of the race.
---
City & State has a list of key endorsements to date for this race.
Tomorrow (Tuesday) night, Cooper Union's Great Hall is the site of an "environmental candidate forum" among the candidates for this seat. Register to attend (6-8 p.m.) here.
Meanwhile, this Thursday, Village Preservation is hosting a webinar with the League of Women Voters of the City of New York to speak about the process of redistricting and how it has impacted Greenwich Village, the East Village and NoHo. The session starts at 6 p.m. Sign up for it here.
Posted by Grieve at 4:30 AM

We still remember the polls in the days before the mayoral primary, giving Andrew Yang 20+%, who barely received 10% in reality. These numbers are insignificant.

Dan Goldman, the only one who actually did something for us, and for the country.

Please please please if you are reading this, do NOT VOTE for RIVERA. Her actions have while in office have only hurt our district, ie: changed zoning laws to benefit developers, the demolition of affordable housing in landmark quality buildings for the "Moxie" chain hotel and lastly her vote to demolish the East River Park. She does not have our interest she is part of the political machine fueled by greed.

What a clown car.

VOTE THEM OUT - ONLY YOU CAN DO IT

The key is getting out the vote. So few people vote in the primaries and they determine who our next electeds will be. We can't let Rivera or DeBlasio win.

As much as people like to complain about Carlina Rivera she’s the only one on the list with any real connection to the East Village. Dan Goldman has spent his life splitting time between DC and New York and probably couldn’t find the East Village on a map. De Blasio is all about Brooklyn as we saw when he was Mayor. Niou is about Chinatown. So who else on this list who can win will spend a nanosecond even thinking about the East Village besides Carlina Rivera? Case closed.

Yuh-Line Niou was better on the East River Park Rivera/DeBlasio destruction. Unfortunately she's out in front on other issues that, while I may agree in general, are probably a bridge too far for the district.

At this point I like yuh-line niou. I say this as an (almost) lifelong east villager.

So what exactly has Rivera done for the East Village so far? I find her record a decidedly mixed bag but I'm curious what you would list as her pro-neighborhood accomplishments.

@2:30pm - Governors Island approved an on-spec skyscraper to be built. They pushed it through City Council under the guise of "climate change" something-or-other. Nothing says environmental conservation and sustainability than building an unnecessary mega-structure on what could be more park land.

I look at GI and ERP and the total neglect of Tompkins Square Park and am furious that our elected officials have done NOTHING for this community.

Bill De Blasio just dropped out of the race. He never had much support anyway, but in a close race it likely comes down to which one of the front runners can get more votes in Brooklyn. Imagine that: the EVs future is now dependent on how Brooklyn hipsters and yuppies vote.

Carlina Rivera grew up here, in the projects, she went to school here, and has worked on EV community issues for years. She has personally helped people I know. I like Dan Goldman when he is on MSNBC, but it appears he just wants to be a politician now. Having announced and then withdrawn from the Attorney Generals race, since he can’t beat AG Letitia James, now he suddenly wants to be in Congress? It looks like a stepping stone, much like Mayor Adams who is already fundraising for is reelection and probably like De Blasio, thinks he will be Governor. Dan Goldman doesn’t even have a page to list issues on his website. He’s a DC, Yale/Stanford guy who got famous on Cable TV and during the impeachment. He’s also an heir to the Levi Strauss family fortune and is a Wall Street big corporation guy, who are trying to buy this race. The only role he is playing is to hurt Niou among White voters: Goldman will probably pull the Jewish vote away from Yuh-Line Niou who endorsed a boycott of Israel. Almost no one in the Democratic party besides AOC supports BDS because would destroy their fundraising and lose the Jewish vote. With her boycott Israel position, Niou is too progressive for most of the district voters and the party as well. Rivera is the best choice we have.

I just ran into Dan Goldman in the Westside Market @ 3rd Ave & 12th St. I guess he was able to find his way to the EV.

Carlina Rivera has a strong history of good work while at GOLES and a deep connection to the neighborhood. She voiced support for the return of Charas/El Bohio and embraced policies for a greener and more just city. She advocated for tenants and for neighbors terrorized by developers turn rooftops into lucrative, private outdoor party-spaces. She has shown courage in defending homeless and victims of police brutality. Some argued that she could have taken very different positions on the East River Park and rezoning, but these were failures of the entire city council, not necessarily fights to win. Another candidate that deserves more attention is Yuh-Line Niou who has proven herself as a progressive, smart policy-maker but is not yet as known in our neighborhood and not likely to get many from ultra-rich donors. This open seat election deserves much more debate in our neighborhood and in the entire newly formed district. - This is the kind of primary were the ranked-vote-system from the previous election would have been great.

Dan Goldman lives on the west side in a luxury condo, but that’s a nice try from someone obviously trying to make him look like a local.