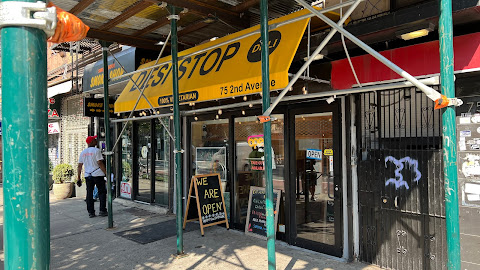 Some good opening news... Desi Stop has debuted at 75 Second Ave. between Fourth Street and Fifth Street. (Thanks to EVG reader Garth for the photo and tip!)
The deli, serving homemade Indian food, tea, coffee and snacks, is open daily for now from 7 a.m. to 4 p.m.

For months it looked as if the quick-serve shop would never make it to an opening date.
Here's a recap from an EVG post from April...

Last August, Gurjaipal Singh and his partners took possession of the storefront at 75 Second Ave.
They aimed to open Desi Stop in the fall.
As of mid-April, Desi Stop remains in limbo, and Singh says he's gone bankrupt waiting for the city to OK the address to open and start serving food.
"Unfortunately, after six months and spending thousands of dollars and meeting with all requirements of city departments, we are still waiting for clearance to open up," he said in a text message. "Slow working of city departments is killing small businesses like us even before they can open."
The problems started in November 2021 when the Department of Buildings conducted the gas inspection. According to Singh, DOB officials said that they could not find any records in their database for the space after 1999. The DOB could not then approve the inspection. (It's not clear how the previous restaurants at the address, Nostro Ristorante and ZaabVer Thai, among others, were able to open.)
So Singh said that they started from scratch with the DOB, which included getting clearance from the Landmarks Preservation Commission (the building is within the East Village/Lower East Side Historic District), submitting new drawings and applying for new permits.
Singh also hired a fire suppression company. There was an initial delay by the company and then with the FDNY, Singh said. The certificate of approval remains in the review process.

Anyway, all that is behind Singh and his partners, and they look forward to serving the neighborhood "after a lot of struggle."
Posted by Grieve at 5:00 AM

Looking forward to eating here. I'm glad there was a good and relatively quick resolution to this situation.

And of course they get to open under an eternal sidewalk shed.

Wouldn’t it be nice if our Councilmember took time off from running for Congress to figure out how to change the City torture process for new businesses.

If you really want to help NYC, you would cut regulations by 90%, and shut down all these busybody agencies.