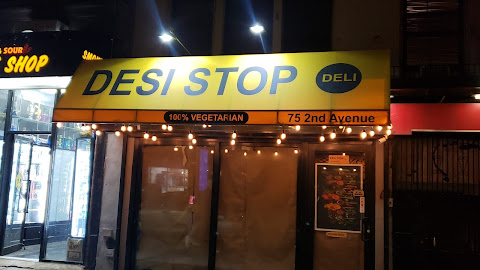 Last August, Gurjaipal Singh and his partners took possession of a storefront at 75 Second Ave. between Fourth Street and Fifth Street.
They aimed to open Desi Stop, a deli serving Indian food, tea, coffee and snacks, in the fall.
As of mid-April, Desi Stop remains in limbo, and Singh says he's gone bankrupt waiting for the city to OK the address to open and start serving food.
"Unfortunately, after six months and spending thousands of dollars and meeting with all requirements of city departments, we are still waiting for clearance to open up," he said in a text message. "Slow working of city departments is killing small businesses like us even before they can open."
The problems started in November when the Department of Buildings conducted the gas inspection. According to Singh, DOB officials said that they could not find any records in their database for the space after 1999. The DOB could not then approve the inspection. (It's not clear how the previous restaurants at the address, Nostro Ristorante and ZaabVer Thai, among others, were able to open.)
So Singh said that they started from scratch with the DOB, which included getting clearance from the Landmarks Preservation Commission (the building is within the East Village/Lower East Side Historic District), submitting new drawings and applying for new permits.
Singh also hired a fire suppression company. There was an initial delay by the company and then with the FDNY, Singh said. The certificate of approval remains in the review process.
"They open the file only once in four to six weeks. Ask for the requirements, then again another six weeks of waiting," Singh said. "We have made all the investments. But now, we have reached our limits. It's a small-business startup, and we can't pay bills from our own pockets for months. And now it looks like we have to close it even before opening this business."
Desi Stop's most recent, and perhaps last, Facebook post reads:

Going Bankrupt.  It's very unfortunate to share that we are going out of business without opening the business. Slow and unresponsive behavior of different city departments killed this small business.

noooooo! that's crazy! look at this appealing little gem! how can the average citizen help?

Hopefully there is a continued push to cut back on some of this silly red tape by the government. Adams was saying a lot of intelligent things about trying to limit this stuff, so hopefully he stays focused on it. The level of red tape for small businesses (and businesses generally in NYC) is insane and sad.

I feel bad for this guy but is anyone really surprised by this. Most govt agencies have zero incentive to work hard and efficient. And now Covid simply amplified the problem with agencies using it as an excuse to really drag their feet. No one gets fired from a govt job for not working hard enough besides maybe emergency services. Only way to get anything expedited is having a politician breathing down their neck, know somebody powerful or some money under the table. Unfortunately this problem has been longstanding and will not end anytime soon.

This is such BS and so typical NYC - Feel bad for these guys. Dreams shattered by the city

This one again highlights the fact that non-elected government workers are, and will never, work for the people. No incentive to work hard + they always ask for larger budgets every year...

Tired of government workers being disrespected and this includes teachers. Perhaps it is about the levels of bureaucracy and a system that needs to be reformed and overhauled.

Not that they're likely to help, but perhaps contacting Carlina Rivera or Susan Stetzer can get some action?

This is awful, feel for them, ya gotta wonder if they were trying to open a corporate owned bar if Rivera and Stetzer would've made the paper work go away or pushed things along ....makes me sick how the officials in our nabe do not get off there butts and help small business people especially when those businesses will serve the community but will steamroll over a park at corporate request

In nearly every interaction I have had with government officials I have found all of them to be hard working people. Most of the time, frustration comes from inefficient regulations, not from the workers themselves. Add understaffing to that and you have a beuracratic nightmare.

The trope of government workers as lazy is just not accurate in my experience.

Maybe they can sue the landlord for claiming the commercial space would be restaurant ready when it sounds like it definitely wasn't up to regulations.