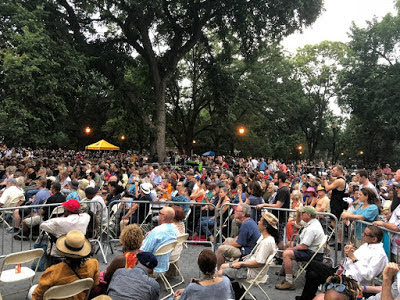 The Charlie Parker Jazz Festival is returning this summer to the place where it all began — Tompkins Square Park.
The City Parks Foundation announced the lineup for SummerStage 2022 yesterday (read the full rundown here; Gothamist has a story here).
Included in the lineup of free and benefit shows: The Charlie Parker Jazz Festival on Aug. 26-28. The first two dates are in Marcus Garvey Park in Harlem. On Aug. 28, the festival makes its way to Tompkins Square Park from 3-7 p.m. (This show is free.)
Here's what to expect here via the SummerStage 2022 program:

An abbreviated version of the Charlie Parker Jazz Festival took place last year in Harlem; the 2020 slate was cancelled with the pandemic.
The festival started in Tompkins Square Park in 1993 ... taking place near or on Parker's birthday on Aug. 29. Additional dates were added in Harlem in 2000.
Parker, who died in 1955 at age 34, lived at 151 Avenue B from 1950-1954. That residential building between Ninth Street and 10th Street is landmarked.
Photo from 2019 by Steven
Posted by Grieve at 5:14 AM

I can’t wait, this is always one of the best events of the year, and there’s no mosh pit either. Now can we tell those two Kim Kardashian wannabes not to come in late again and dance in front of people’s faces, blocking the view of those who just want to enjoy the show?

This news makes me so happy! I agree with Anon 6:15am-an excellent line up of musicians.
Now if we can get Cookiewalk back, my life in the EV will be complete.

No one is here yet fear mongering about covid? I guess the EV has more Jazz fans than Hardcore nowadays.

I was lucky enough to see the great Lou Donaldson in 2016. He sounded incredible.