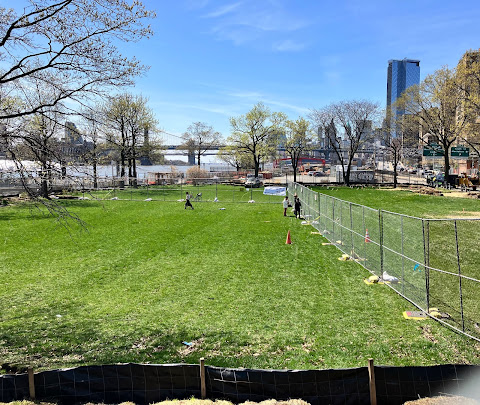 EVG photos from Friday
This past week, workers fenced off nearly half of the passive lawn in the area near Corlears Hook (at the site of the former composting yard).
This came without any notice via the city's weekly Construction Bulletin. This week's edition states that this is for "Ongoing site preparation, including clearing and grubbing." 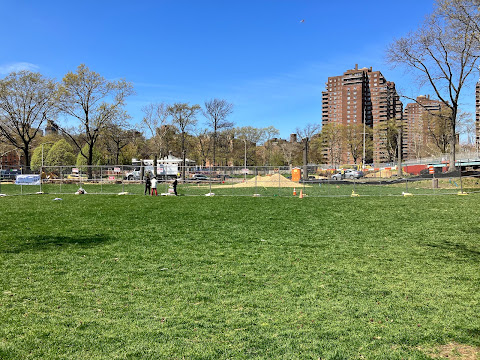 Why is there a lawn here as a replacement for the park but it will be denuded of trees? People and animals will just spend the summer baking on the grass? These are not trivial questions. Trees are being killed for… what? This site is not even supposed to be elevated according to the DDC's ESCR...

Officials have said this field can serve as a dedicated space for nearby residents to use for recreation for the years the rest of the adjacent East River Park is gutted.
The lawn, which opened in late January and appears to have some drainage issues, is accessible through a narrow passage marked by chainlink fences that leads from the Corlears Hook Pedestrian Bridge to the ferry.
There isn't any signage pointing potential passive-lawn users to this space. (You need to go down to the ferry stop to find the entrance.) This may explain why few people have been spotted on the grass, excluding several dog owners walking their pets.
The city has said they will maintain public access to a minimum of 42 percent of East River Park throughout construction, which is expected to be complete by the end of 2026.
Posted by Grieve at 5:09 AM

Here's a scrap of lawn to make you stop complaining. Oh, it's a flooded muddy swamp? Well, let's just take half of it away to stop you from complaining. This whole "project" is such an infuriating, insulting disgrace. F*** DeBalsio and his cronies.

Mayor Adams gets it around the police issue, will he also get it around environmental issues?

This whole project is disgusting and horribly implemented. We are the people, I don't understand why the people don't matter. We are the city. Nothing makes sense.

Sold out by our Councilwoman and the former Mayor. Astroturf and blazing sun for decades to come. There was a plan that could have saved the Park and kept away flooding, but the our neighborhood is a sacrifice zone for better-funded interests.

Everyone who didn’t care to vote or wanted this doesn’t know it yet but this is going to help the Manhattan exodus (keep raising those rents). There is no where to run or ride bike safely on the East Side. There is no outdoor space to enjoy that isn’t flooded or destroyed from high traffic (looking at you NYC Parks neglected Thompkins Square Park lawn). The city has done a wonderful job of just ruining quality of life with these efforts.

That’s not a passive lawn, that’s a passive aggressive lawn. It’s a symbol of how much less pleasant and usable the new park will be. The problem with the new parks like Domino Park is that on a hot summer day there is almost nowhere to get any shade. New trees simply are not large enough or full enough to provide it, and the designers put in puny trees spaced out in a way that they probably never will. This makes these parks much hotter on a hot summer day. That means more sunburn, more skin cancer, more heat exhaustion. I can recall many summer days cycling down East River Park looking for a shady spot to rest, and noticing how many people were enjoying the shade from the benches under the many tall trees, and how the benches without shade were mostly empty. The coolest spot is under the Williamsburg Bridge, so at least that will still be there. Losing all of those beautiful old trees wasn’t just bad for the trees, it was bad for all of us, for generations to come.

Good point about Domino Park. It's terrible on a hot summer day. The only relief is to go indoors, which, if you're really into conspiracy theories, you might conclude this is part of the plan. Enjoy your outdoor space, but ultimately, we want you to patronize the nearest bar/restaurant in order to find shade.

I used to go to East River Park all the time to find relief from my hot apartment, and from Tompkins, which can be overcrowded and loud in summer. There will be no replacement in my lifetime.

That photo sums up what they probably have in mind for the new park, so much glare! Just big wide open spaces with no shade anywhere. If you go to Sheep Meadow in Central Park on a hot day most of the sane people are sitting on the edges in the shade under the trees. The trees in Battery Park city have taken years to develop to the point where you can finally find a little bit of shade, but not much. But I’m sure there will be some nice concession stands and cute little restaurants with umbrellas and indoor spaces where you can find some shade, for a price.