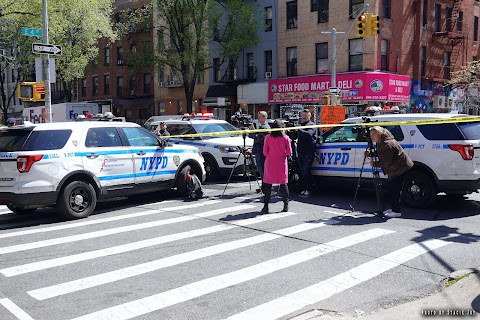 Photos by Stacie Joy
Updated 4/30 11:30 a.m.
Police sources tell us that they have "a person of interest" in custody. More details to follow...
-----
Police are investigating a fatal shooting this morning outside the Mariana Bracetti Plaza public housing development on Fourth Street at Avenue C. 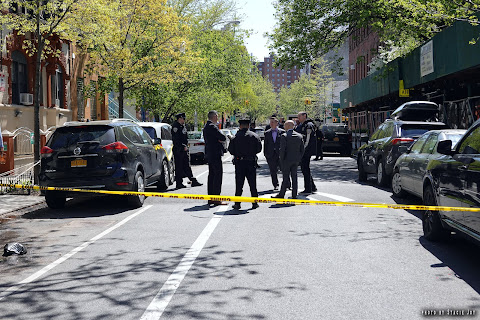 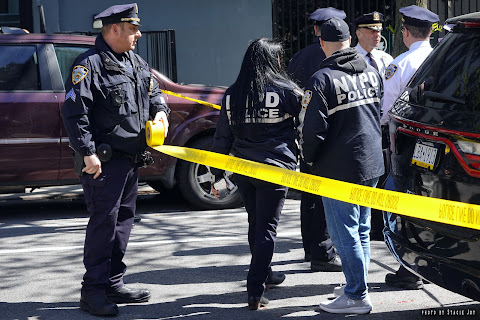 The fact that this happened as kids were going to school next door and people all over the street is extremely dangeorus.

As usual, people on the news are acting like this is such a nice, safe neighborhood. There are so many guns on the street these days, and this is how people are solving their problems.

It is weird I agree. Our neighborhood is not fancy like these yuppies thing. Just look at our nasty ass park.

Please EVGrieve, link January 14 story by Stacy Joy in EVGrieve about problems at this NYCHA site.

Terrible for so many reasons.

sounds like the rumors i was hearing this morning on the block. internal turf stuff. we are just lucky no one else got hurt in the midst of it. ABC reporting victim was also arrested earlier in the year for hitting a 23 year old woman in the building.

Terrifying. I live three blocks away from this. I am shocked this took place during broad daylight in the morning. Our EV is becoming like the wild west.

They say the suspect was wearing all black and riding a bicycle, which means he's a delivery guy for Grubhub.

Psst 6:31 the EV was ALWAYS like this. The quiet you saw under Bloomberg and Giuliani before him was a MIRAGE.

So according to CBS I think, or one of those, the camera didnt catch any good image of suspect because of the surplus of scaffolding around....
so as predicted, cops probably wont get too far here

Police have a suspect in custody. See the update at the top of the post.

Great News! First I heard of it so glad to hear and hope this chills everyone out a bit