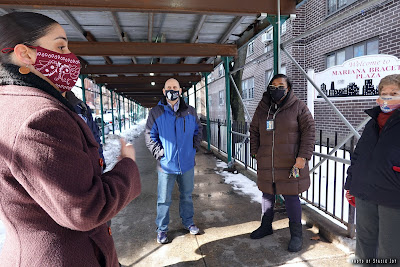 In a follow up to our initial story on the living conditions at Mariana Bracetti Plaza housing, local elected officials, a representative from Community Board 3 and NYCHA deputies met with tenant activists Kanielle Hernandez and Yvette Maria this past Thursday to view the buildings and grounds and map a plan for change here on at the complex on Third Street and Fourth Street along Avenue C.
Present were District 2 City Councilmember Carlina Rivera and her assistant Irak Cehonski, NYCHA Deputy Director for Security Safety Strategies Andre Cirilo, NYCHA Regional Asset Manager Brenda Allen, State Assemblymember Harvey Epstein and his Chief of Staff John Blasco (who has been particularly active in assisting people living in public housing) and Community Board 3’s District Manager Susan Stetzer.
The group did a walkthrough to inspect the conditions of the buildings, making note of what needed to be done on both city and state levels to effect change.
During the tour, the group witnessed and discussed flooding, leaks, sewage and infrastructure issues, broken door locks, cracked pavements, sidewalk shed safety concerns, trespassing, nonfunctioning elevators, biohazards, and PSA4 (housing police) response, drug use and busted locks. 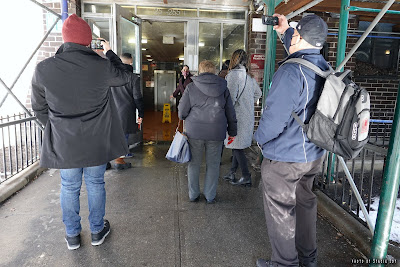 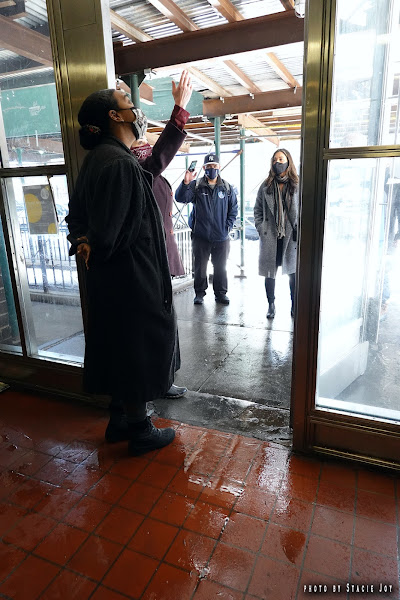 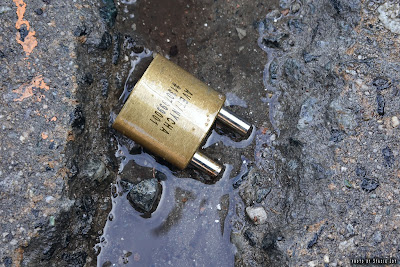 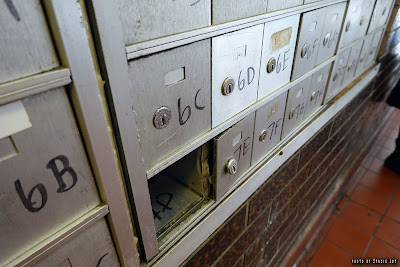 The tenant activists are hoping to start a tenant patrol and resident association, as well as partner with NYCHA and elected officials to bring about change in the quality-of-life conditions.
After the tour, I talked with Kanielle to see what has happened after our story was published this past Jan. 14, what is currently occurring, and what she sees in the future.
How did you feel when your tenant activism brought together city, state, and NYCHA representatives to help fix the conditions you detailed in your interview?
I felt great. I walked away feeling hopeful and thankful. I know everyone is busy but having them all come and hear us was amazing. The energy was one of unity. We took turns talking and listening. It felt nice to meet them in person and actually interact with one another.
A divided community doesn’t get heard. It gets abandoned and taken over. The more we come together and unite our skills and resources we can identify, understand, and resolve the issues more effectively.

Can you speak a bit about what happened after the story was published?

Since the story has published it seems like a lot has happened. Sadly, though a man was shot and killed on the corner of Third Street and Avenue C. There has been a lot more police presence in the building and the community since the shooting. Our front door was also fixed. And there seems to be fewer drug addicts waiting around in front of our building.
The walkthrough was put together by Assemblyman Harvey Epstein’s team. They reached out to me after the story was published and set up a conference call. Harvey, Aura [Olavarria] and John [Blasco] have been great. I also met Carlina Rivera and her team and two NYCHA representatives. I have connected with a lot of new people from the neighborhood. Most of them also dealing with a lot of the same issues. 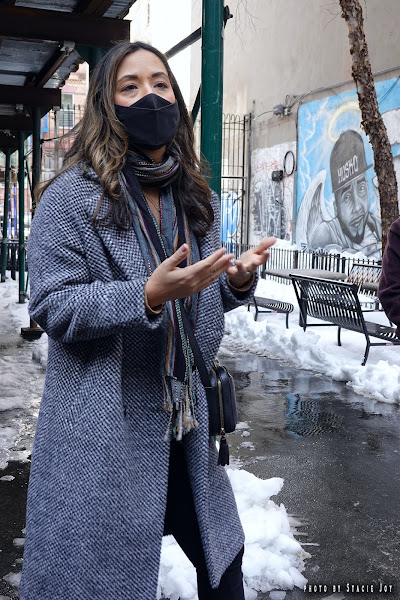 What do you see going forward? What are some of the resolutions proposed at today's meeting?

Moving forward I see a lot of positive results. I see more unity in agencies, NYPD and the community.
NYCHA has a resident watch division. It’s a part of the tenant patrol program. Tenant patrol is currently inactive due to COVID. The resident watch has created a tip-line number, which can be reached anonymously. It’s for the tenants so they can now report things like homeless addicts sleeping in our hallway, or getting high in the staircases.
And for neighbors that allow their guests to disrespect our building with illegal activity or inconsiderate behavior. For example, groups of people smoking, drinking and playing loud music in the hallways. Or neighbors that let their dogs piss and shit in the hallways and don’t clean it up.
For the tenants who refuse to stop smoking cigarettes in the elevators. Your apartment will be given a warning. The security cameras work and the resident watch department has access to them.
I would hate to see anyone lose their apartment over things that can be adjusted. Wait until you go outside to light your cigarette. Play your music but if the walls are vibrating then it’s just a li’l too loud. I’m not saying stop playing the music, I’m asking to simply lower it to a reasonable and considerate volume. Remind your guests when they visit to act accordingly.
And if they are visiting you and are caught soliciting in the hallway or staircase then your apartment will receive a warning. A second warning will be an official complaint to management. Hopefully, tenants and their guests will get on board with the new boundaries set in place with the intention to restore peace and safety in our building.
Another NYCHA representative took pictures and noted the building conditions and said she would work on NYCHA’s part. And the elected officials are doing their part by staying on top of the issues and working toward getting outreach programs for the homeless. Everyone seems on board with working together to rectify the issues at hand.
And I have been busy with research, emails, meetings, and tons of phone calls. Gaining knowledge is imperative to pursuing this the right way. Along with a lot of patience and gratitude.
What are some of the reactions (positive or negative) you received from neighbors?

The story received such positive feedback! And a lot of support, which I’m extremely grateful for. It’s been super encouraging. To the people who left such nice comments, thank you! You’re awesome and appreciated. It showed me that I wasn’t the only one with the same feelings and concerns for the conditions of our building and neighborhood.
There actually hasn’t been much in terms of negative reactions. At least none that I’m aware of. Hopefully, I’m not jinxing it [laughs]. But my intention is not to cause any more negativity. I don’t know what the future holds for our building and our community as a whole, but I do intend to continue speaking up until we see the changes we want and deserve.
Anyone — all inquiries will remain anonymous — interested in hearing more or has any questions and/or concerns can email us at ourcommunityisyourcommunityles@gmail.com and/or sign the petition here.
Another look at conditions in and around the Mariana Bracetti Plaza public housing complex
Posted by Grieve at 5:30 AM

It takes a village!

So good to hear there is help & hope, great story !!

I don't think much is going to change. They aren't going to evict anyone regardless of their behavior. In the current political environment the NYPD isn't arresting homeless drug addicts. Quality of life issues won't be addressed in a meaningful way. The building can be repaired but that's about it.

It's best that this public housing complex goes into the hands of a private developer at this point.

NYCHA is a corrupt mess. Employees overclock in overtime while purportedly it is cash strapped.

The only economically viable way forward is cross subsidization. The NYCHA has to partner with private developers and use the proceeds to make capital improvements. Sadly most NYCHA residents object to the partnership and label it state sponsored gentrification. Neither the federal nor state government has the political will or financial resources to bail out the NYCHA.

This is a perfect example that the city is really the worst landlord. If this was a private landlord they would be in jail. The poor tenants that have to suffer as the government is useless at running businesses. They are not accountable to anyone so things are run poorly and corruptly.

Re Beacon and the anonymous comments above: I think the simplest explanation is that it's just not a good building. It just doesn't work. Bad architecture. Even in private hands this building would be losing money and would be slowly falling apart. It would be one of those buildings that asks for unreasonably high monthly common charges, even though it provides no amenities.

The fact that the city is running this place has probably kept it alive longer than it would have in private hands.

Similarly I think NYCHA could totally maintain buildings well, if they were better architected. Like put a shop on the ground floor to have a bit of income. That little extra money makes life a lot easier, and suddenly the building can withstand the occasional problems that you always get, instead of falling into a death spiral where every year maintenance costs rise because you're falling further and further behind, requiring ever more expensive repairs.

So I don't think there is a fundamental problem with public housing. I just think that there are problems with mid-twentieth-century architecture. I think private ownership wouldn't solve anything, except that the building would have been sold, torn down, and replaced already. But if that's going to happen, I'd rather want better-built public housing.

Conditions are citywide. Mold is increasing in bathrooms throughout. Leaks cause plasterers to replaster OFTEN on the side where commodes, sinks and bathtubs areas but painters never follow up. Better procedure should be considered when repairs are needed. Tickets are "reviewed" by NYCHA to revify that a problem does exist, before repairs are made. This is assinine because who is going to call in a non-existent condition in their apartment. Pretty sure this verification process is the cause for the backup on opened tickets. All these conditions are also a major problem in Spanish Harlem and Harlem NYCHA properties.
Also NYCHA should strongly consider putting tenants who require mental health attention in one centralized location near a hospital. Using the same concept used in the Gaylord Houses in Manhattan, where all tenents are senior citizens living in apartments with direct contact with the FDNY/EMS. These mental health need tenents create an unsafe hostile living conditions. The management doesn't get involved when a mental health person is involved in a situation, allowing dangerous conditions and behavior to continue.
NYCHA should also consider using the front office/room for the Housing Police/NYPD to occupy and serve tenents and community.

As a resident of E 3rd St near Ave C, I can say it's made a world of difference having the police stationed outside the corner of 3rd and C. No more congregating, no more drug sales there, no more lewdness. It's been such a relief to not have to plan our trips outside around a certain area to avoid. I don't know how much longer the cops will stay there, but if it just takes one lowlife drug dealer getting taken out for them to come, I don't care how many it takes for them to stay. Good riddance.

Thank you, EV Grieve, Kanelle, and all of the others mentioned. I’ve been following this story since January and appreciate the community involvement.