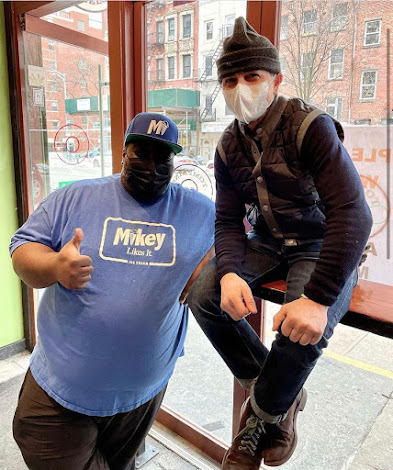 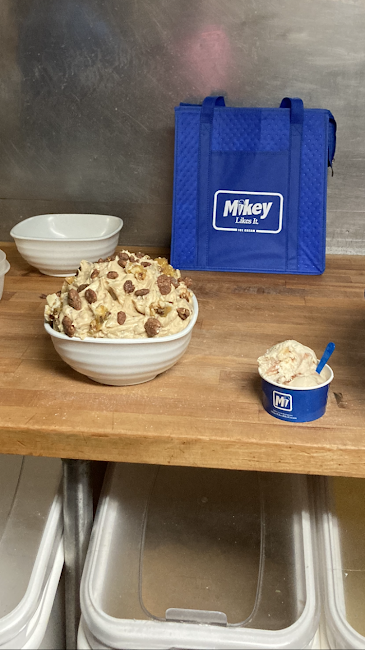 Thrill-seekers may also order the Southern Hospitality cream cheese on an everything bagel with strips of bacon (you have to ask for Mikey's Southern Hospitality sandwich).
For the rest of February, 10 percent of the sales from these items will go to the Loveland Foundation, a therapy fund for Black women and girls.
The two shops plan to collaborate more in the future.
"Mike and I have been talking about doing something together for years. Running a small business alone can totally consume you, and no matter how many times Mike and I bumped into each other on my walks home from work, we could never find the time to pull it off," TSB owner Christopher Pugliese told me about Mikey's founder, Michael "Mikey" Cole.
Pugliese called Cole about this idea last Wednesday, and by Friday, Cole was in the TSB kitchen on Avenue A.
"We had a blast and plan to do more collaborations together as well as some other charities feeding the homeless and hungry on the Lower East Side and in Harlem. Mike does a lot of charity work and when I asked him if I could join in he was very welcoming to the idea," Pugliese said. "I have to tell you, at one point he was working with my guys and I was looking over at him and I was just so happy he was there and that his place is around. COVID has taken so many small businesses. I really hope people in the East Village will show their support for Mike's place. I can't stress enough what a great, kind, big-hearted guy he is."
Posted by Grieve at 5:10 AM

Kudos to Mikey AND to Chris - these guys are two of the best people in the East Village! We're lucky to have you both here, and it's wonderful that you're collaborating!

This is Great! Two of my favorite friends ❤

It'd be hard to love these two shops or these two people more. They're great neighbors, they always seem to be doing the right thing, I can't wait to one of Mikey's Southern Hospitality sandwiches... waistline be damned

Mikey! what up brother ? Thanks for giving back my friend -

It's great how you can often see Mikey at his store late into the evenings.

I'd like to try that sandwich but I think about 1/8 of it would finish me off!

This is AWESOME. More please!