Ralph's returns after a winter break 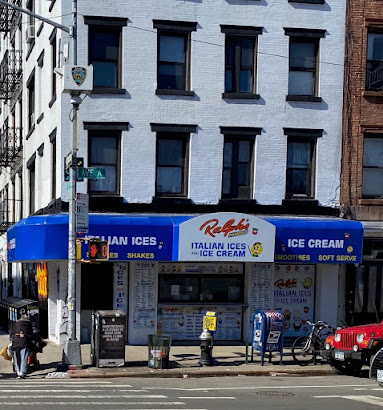 Perhaps as a sign of the approaching spring (wishful thinking!), the EV outpost of Ralph’s Famous Italian Ices and Ice Cream has reopened — as of yesterday — at 145 Avenue A at Ninth Street after a short winter break.
They'll be open daily for now from 2-10 p.m.
This location, the third in Manhattan, opened back in September.
As previously noted, the business dates to 1928 when Ralph Silvestro started selling Italian ice (or water ice) from his truck around Staten Island. The first retail store opened in 1949 on Port Richmond Avenue in Staten Island.
In recent years the company has franchised out, expanding to other parts of NYC as well as Long Island, New Jersey and Westchester County.
Photo yesterday by Steven
Posted by Grieve at 5:00 AM

I am so happy Ralph's is open again!

I've heard and seen an ice cream truck around 11th street at least twice in the last week at night.

Me, too! It was surreal! I was wondering if it had been brought in for the "Pose" filming, but I saw it just driving around normally with the music on.

Tried it once, got the cherry coke ice, which was tasty, but they're pretty overpriced.

maybe I caught them on an off day, but just swung by and it didn’t look like anyone was home

WTF wants ice cream in the dead of winter? Just sayin. Hit me up in May or June.

They were open tonight.