Sen. Hoylman honors local businesses for service during the pandemic, including Mikey Likes It 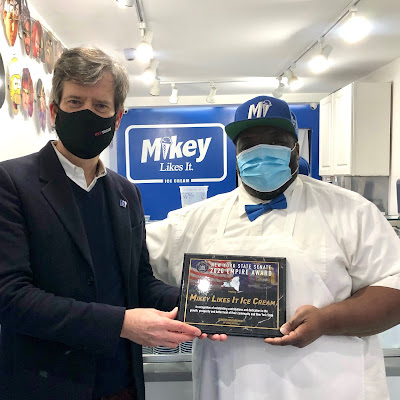 Sen. Brad Hoylman presented three downtown merchants, including Mikey Likes It Ice Cream at 199 Avenue A, with the Empire Award — the New York State Senate's highest award for local businesses.
The 183-year-old C.O Bigelow Chemists on Sixth Avenue near Eighth Street and Madman Espresso on University Place were the other two recipients.
Hoylman is honoring these three businesses for their distinguished service and community involvement during the pandemic.
"One of the main pillars of my business is giving back to the community and being a positive example to the people who we serve," Michael "Mikey" Cole said in a prepared statement. "I grew up a few blocks from my first shop ... and I always wanted to find a way to reinvest into it and make a positive impact."
During the pandemic, Cole has volunteered to help neighbors in need on the Lower East Side and in Harlem, where his second shop is located.
Hoylman's office is asking for people to nominate other restaurants and small businesses that helped support New Yorkers during the pandemic. If one wants to nominate a business, then they should email hoylman@senate.gov with "Empire Award Nomination" in the subject line.
Posted by Grieve at 5:05 AM

Congrats Mikey - Keep up your presence in the community pal -

so much happy from this

Typo in email address. Should be: