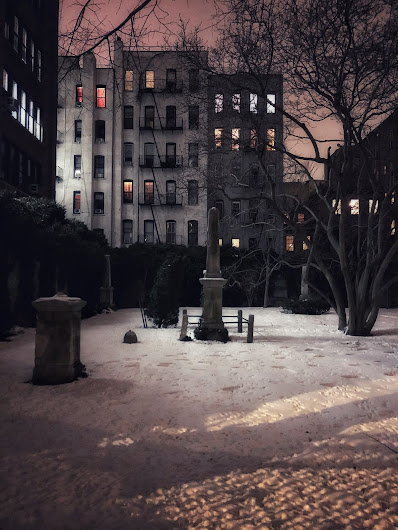 • Local chefs from 886, Málà Project, Fish Cheeks and Nowon have teamed up to raise awareness about the rise in hate crimes against Asian Americans (Eater)
• Police say a few protestors from the Black Trans Liberation NYC rally on Thursday night vandalized Jackdaw on Second Avenue and 13th Street (Daily News)
• Stuyvesant Town-Peter Cooper Village resident Janice Rosario, a choreographer and teacher, launched a nonprofit to help those in need in public housing (Dance Magazine)
• Study shows that the Second Avenue F stop has some of the highest levels of air pollution in subway system (The Guardian)
• Restaurants left vulnerable after NY's commercial eviction moratorium lapses (Eater)
• A feature on the College Student Pantry at Trinity Lower East Side on Avenue B and Ninth Street (B+B ... previously on EVG)
• Theater 80 on surviving during the pandemic (NY1)
• Katz's made it through the 1918 pandemic. Here's how the deli managing COVID-19 (CNBC)
• Where to eat and celebrate the Lunar New Year (Gothamist)
Photo from last night at the New York City Marble Cemetery on Second Street
Posted by Grieve at 11:00 AM

Oh my help me to attend to this beauty. This artist and photographer hits again. Rene Magritte. A solid knockout

Particularly lovely and moody shot of the cemetery, Grieve!

What a gorgeous photo!

I love reading about places like Katz's, Theatre 80, and the Chinatown restaurants being open and still persevering. Gives me hope for the city, and feeling that brighter days will indeed come.