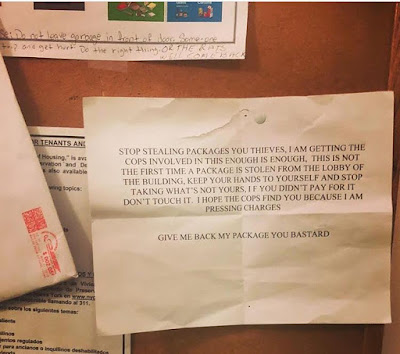 The above photo is from the EVG archives and isn't related to this story in the Times.
Over at The New York Times today, Julie Besonen writes about the East Village building that she has lived in since the 1990s... touching on some relatable themes — changing demographics and package thefts.
Some excerpts:

Package theft wasn’t an issue when I first moved in during the Grunge years, although crack vials routinely littered our stoop. Sleepy addicts sometimes blocked the door. But these entryway inconveniences were minor compared with the constant robberies, which rapidly escalated last year.

But back to 30 years ago: Aside from the stoop problem, our building was a neighborly haven, owned by the same family for generations and monitored by live-in supers, a couple from Malta named Agnes and Tony. Our ensemble of residents (Bill, Bob, John, Pat, Tom) worked unflashy jobs — mailroom clerk, museum guide and so on — and stayed for decades, giving me the chance to grow fond of them, including nuisances like Edith and Victor (secretary, janitor), who banged on my ceiling when my music blared. It only took them 14 years to trust me enough to water their plants when they traveled.

The poignant exodus of these characters, through death, eviction, buyouts and, most recently, the pandemic, made way for my current neighbors, variously named Summer, Kennedy, Madison, Kayleigh, Mackenzie, Hannah and Charity. They pay rents that seem exorbitant, upward of $4,000 in some cases, reflecting the East Village’s own hypergentrification.

However, as Besonen writes, the spate of pandemic-era package thefts helped her forge a bond with her new, younger neighbors.

Ralitsa Kalfas, 23 ... found an empty cardboard box instead of winter coats and sweaters sent to her from her family. A vintage jacket that once belonged to her grandmother was stolen too. My empathy for these young women grew, realizing they weren’t that different from me when I first moved to New York, my shyness sometimes interpreted as unfriendliness.

You can read the full piece here.
Posted by Grieve at 9:00 AM

Life's redundancy throughout the generations in NYC's gentrification cycle...Gen X problems find a common ground with Gen Z problems in the EV.

I see a Neil Simon movie in here somehow...

I wonder if NYC community boards and local police precincts have action plans or are in discussions about this large problem that effects so many New Yorkers in so many neighborhoods. Though many of the specific incidents might be considered mere inconveniences, when taken together this is a massive amount of criminal activity that is impacting New Yorkers. Does law enforcement have guidelines or strategies here?

Stealing packages from buildings on the LES has become a sport.

I lived in the EV for a few years around 2010 and shopped online a lot. It was before online shopping became super popular, in my opinion, and before Amazon lockers. I lived in two walks ups. I never lost a package. I even used to leave packages at the entryway for the mailman to pickup. Neighbors never stole and I barely knew them. I did have to spend much time waiting in line at the old 14th st post office to pick up the occasional missed package. It’s unfortunate how bad package theft is now.

Sadly the police can not and will not do anything about package thefts. Security cameras are not even a deterrent for these thieves.

Petty theft is usually a crime of opportunity. If building security is lax or legitimate people in the building allow access to illigitimate people either by letting them in at the door or by intercom, then you are always going to have the problem. Perhaps you can have your packages directed to a nieghbor who is home during the day? It's sad, but it is a fact of life whether you live in the city or the suburbs.

Our packages are stolen all the time and we live next to the 9th precinct. There is no stopping them they buzz in and just take anything they can sell and walk out.

It was happening all the time back then (source: cleo the Jamaican UPS lady I talked to everyday for ten years). A lot of times if their cart or hand-truck gets left out, some moron will just be walking by and grab a box. So hard to say if theres been an increase or not because its largely anecdotal but it seems like savage petty crime is thriving there. So lame

Isn't this a sign to people that you might try a different way of getting your packages delivered? There are many more packages in lobbies of tenements these days than there ever were, and while I try to carry what I can up to their owners' apartments—and I see other tenants do too—this "vigilante valet" service can only go so far; you're going to lose packages until you suck it up and spring for an Amazon locker or other delivery option.