For the first time, the city has released data broken down by ZIP code to show who is receiving the COVID-19 vaccine.
The stats released yesterday by the Health Department show that 10464 (City Island in the Bronx) has the highest vaccination rate, with 25 percent of residents having received both shots ... followed by 11004, which covers the Bellerose, Douglaston and Little Neck neighborhoods in Queens, with 20 percent of the population having been vaccinated.
At the other end: 11208, 11212 and 11368, covering Cypress Hills, East New York, Ocean Hill, Brownsville and Corona, where only about 2 percent of people in those areas have received both shots.
(A note: The data does not include information on how many adults in each ZIP code are eligible for the vaccine under current New York state guidelines.)
Per the Times:

Officials in New York City released new data by ZIP codes ... that they said underscored troubling disparities in the city's vaccination effort, with the share of residents who are fully vaccinated in some wealthier Upper West and East Side ZIP codes, which have high proportions of white residents, reaching up to eight times the rate in parts of predominantly Black neighborhoods like East New York.

Said the DOH's First Deputy Commissioner Torian Easterling during a press conference: "The figures published ... show the scale of the challenge in front of us. Just as we've seen, there's a much smaller proportion of vaccines going to Black and Brown New Yorkers. We see these geographic disparities bearing out as well."
As Gothamist noted, Mayor De Blasio "insisted the vaccine program was designed with NYC's historic health disparities in mind, and with enough vaccine doses — he says about a half-million a week — the disparities would be alleviated. But he also faulted vaccine hesitancy and distrust for exacerbating the gaps in who is getting vaccinated."
Meanwhile, how do East Village and Lower East Side ZIP codes stack up?
Here's a look at the data... 4 percent of adults in 10002 have been fully vaccinated... followed by 5 percent in 10003 ... and 5 percent in 10009... 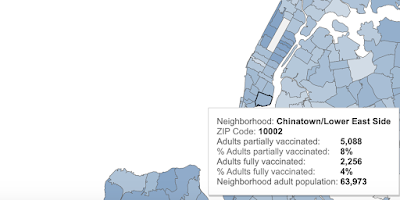 Someone on Twitter posted this directly compared to covid positivity rate at height of pandemic.... basically total opposites. Now add minority and low income and its actually pretty shocking, or not that surprising. Will follow up if I find link

This is very complex because these are the same neighborhoods were poverty is high, school attendance is low and mask & social distancing practices are not followed. Also booking the available appointments for a vaccine is incredibly difficult. It require a smart phone or good computer. You'll need a network of friends who scout up to a dozen websites everyday, all day long, and who are ready to alert you the second a handful of appointments appear. Then you have to fill out a form as fast as you can -- and chances are someone will beat you to the finish and the appointment will be gone. If you manage to secure an appointment after weeks of trying, you'll then have to get to the appointment which could be on the other side of the borough.

OR you could go to https://nycvaccinelist.com and see what's available.

People can also check the NY State website at:
https://am-i-eligible.covid19vaccine.health.ny.gov

BTW, somehow plenty of people in low-income neighborhoods have smartphones, so I don't think it's a lack of access to technology that is the problem here.

I think it's (a) not enough vaccine to go around, and (b) the frequently stated hesitancy of many minorities to get vaccinated b/c of historical issues surrounding vaccination.

The Walgreens website keeps telling me I'm ineligible for vaccine even though high risk health problems became eligible February 15.
The pharmacy department told me same thing. Not sure what's going on because it's listed as a category to enroll but then you get blocked from making appointment.

So--the drugstore pharmacies are only being permitted to give the vaccine to 65+. That does not mean you're not eligible to get it elsewhere, only that they have been restricted by the state from giving it to you. The phrasing is confusing on both DR and RiteAid's websites and I've actually been tweeting irately at them about it, but I don't think they've managed to grasp the problem. Late capitalism at its finest!

Kind of infuriating to see Staten Island sucking up the virus after they decided they were collectively too white and too cop to have to follow the public health rules.

makes sense but I don't know why they are telling people they are eligible if they aren't going to be able to make appointments. I got rejected from Ryan nena and Bellevue too.

For some reason, all of my elderly relatives who live in the Midwest, in Arizona and on the West Coast already have gotten both of their vaccinations, yet New York City residents can’t even get an appointment. You would think that the city that was hardest hit early on would have been allocated more vaccine, but apparently it’s going to more affluent people in other states,
and also to people in states where they still refuse to wear masks.

Yep, a friend in the rural south where the virus is a hoax is fully vaccinated while I qualify but can't get an appointment in NYC.

In Az and CA people over 65 get a call from their doctor and make an appointment. It's very simple. In LA they are vaccinating the elderly on skid row and in encampments throughout the city. In Miami you can go to a Publix pharmacy and get it done easily.

We got texts from "notify NY" taking us where vaccine appointments were available in real time. Jumped on it and managed to snag one on the fourth try.

@9:09am: Why are people getting vaccinated against a "hoax"? Ah, the finest thinking in the stupid South.

Seems like they should have the courage of their convictions & not bother with the shots.

This is more fun than tracking Santa!!!