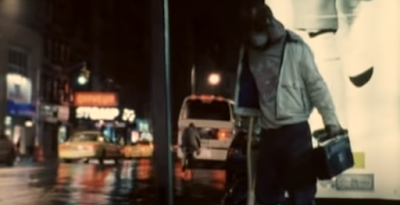 Earlier this week, the French electronic duo Daft Punk announced that they were calling it quits after 28 years of creating music together.
EVG reader David reminds us of the 1996 video for the band's "Da Funk" release ... Spike Jonze directed the 5-minute clip, titled "Big City Nights," which follows Charles, an anthropomorphic dog with a boombox (with a broken volume knob) playing Daft Punk's "Da Funk" as he hobbles along Second Avenue.
The video concludes outside the now-closed Nightengale Lounge on Second Avenue at 13th Street. You might spot a few more familiar locales along the way...
Posted by Grieve at 7:00 PM

"Stomp!" is visible just before the end. LOL, that seems to be the longest-running show no one has actually seen.