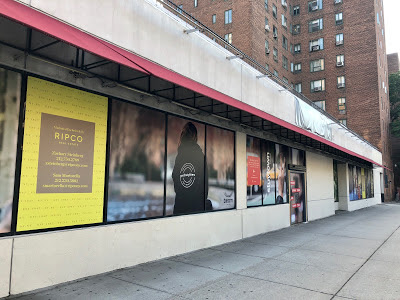 A new grocery store to serve Stuy Town and parts of the East Village is coming to the former Associated space on 14th Street between Avenue A and First Avenue.
Yesterday, Stuy Town management informed residents that Chef's Local Harvest, a 10,000-square-foot grocery store, will open early next year. (Thank you to everyone who shared the message!)
And some familiar names are behind the new store: The family-run market is owned and operated by father-son duo Paul and Aaron Fernandez, who helped create the Union Market chainlet (as seen on Avenue A and Houston) and Ideal Marketplace in Chelsea.
Here's more from the announcement to residents:

Paul Fernandez has operated best-in-class supermarkets in New York City for the last 40 years and has worked to provide quality service and products throughout his career. He grew up in Little Italy after immigrating to the United States at 14, and is a founding member and principal in the Union Market chain, as well as America’s Food Basket Banners.

He is also a former president of the National Supermarket Association, a coalition of independent supermarket owners. His son Aaron began his career playing professional baseball with the Detroit Tigers before joining his father in the family business.
Chef's Local Harvest will feature a combination of fresh produce, fish and meat, in addition to a wide selection of prepared food and grab-and-go options via a café, deli and more.
The space will also conveniently include an entrance directly connecting to the Stuyvesant Town-Peter Cooper Village community, providing quick and easy store access for our community. The store will be open seven days a week from 7 a.m. to 11 p.m.

Associated closed in December 2019. Joseph Falzon, the store's owner, previously told Crain's that a confluence of factors had cut business nearly in half. For starters, construction on 14th Street for the L train obscured the supermarket with a 12-foot fence for nearly two years.
A Trader Joe's opened across the street in early January 2020. (The Target on 14th and A opened in July 2018)During the pandemic, City Harvest used the space for a distribution center called the Stuy Town Pantry.
Posted by Grieve at 5:10 AM

Looking forward to trying but I have fears their price point will be too high. Union Markets aint cheap.

As nice as Union Market is, it’s not exactly “affordable”!

Good news, but hopefully competition in the area will keep prices stable - who knows what clauses are in the agreement.

Gotta beat Trader Joe's in price and make it worth the walk instead of Target or Key Foods. That's the trick for the area especially if you want the college student and yoga mom traffic.

This is what I expected, a more upscale grocery store which StuyTown will use as another amenity to entice more renters. This is basically a larger version of Gracefully, with the difference being Gracefully sells fresher items at a decent price. At least folks won’t have to cross 14th Street just to pick up bananas and milk.

This corner is now the Mecca of grocery stores in Manhattan, with a Whole Foods & Key Foods & multiple bodegas within walking distance

Good news. Hopefully they hire from the neighborhood.

Union Market is at times pricier even than WF. Let's hope they choose a different price range for this place to make it more accessible to Stuy Town residents. A clean store with actual good-quality produce could probably charge somewhat more than TJ's (whose produce is generally uninspired) and survive.

Entrance from within Stuyvesant Town BAD idea. Thanks for giving thieves 2 exits. And I’m sure the people living on the M level will love all the door traffic. Management doesn’t give a crap about M level tenants. They allowed obnoxious people and their dogs off leash ( lease violations) last summer on the small fenced off grass areas right next to M level windows. If I wanted people and their kids and dogs right outside my window screaming with the wind carrying their germs into my apartment through open windows I should just not pay rent because it’s the same as living on the street at that point. Management better designate different rules this summer if they intend on allowing people on all grassy areas again. There are small grass areas that are just too close to apartment windows.

The produce sold at the Westside Market are a step up above the usual players who isn't a Trader Joe's or Whole Foods.

And speaking of Whole Foods which is not in the EV but around it...I've had thoughts that the empty husk of the former Associated could have become a 365 store to compete with TJ's across the street. But never mind as WF has scrapped the 365 store entirely not too long ago.

Anony-3.23 PM-Your post on the M-levels of ST is spot on, thanks for posting that.

We patronize Union Market, quality is good but as noted, their prices are higher than WH.

Those who have deeper pockets and want to go beyond Whole Foods or Union Market should spend it on the Local Farmer's Market. If you want excellent produce and to a certain extent high quality meat products that are far better than what Whole Foods or Union Market has to offer, the local farmer's market in Union Square or around Tompkins Square Park are top notch. And many of the vendors are in fact from the Hudson River Valley just north of New York City.

In terms of alcohol, East Hollow Cidery based up in Rensselaer County near Albany makes a superb hard cider called Natty Rose with a tinge of fresh honey which are sold at the Union Square Greenmarket. Neither Whole Foods or Union Market stock it in their shelves.

There already is a farmers market on Sundays in stuytown

@Beacon is right, there is really no need to buy produce anywhere except on of our local Greenmarkets. Year-round, 4 out of 7 days there's one in Union Square; all year there is one on Avenue A and 7th Street; half the year there is one every Sunday in Stuytown, and one every Tuesday in Astor Place. By. my calculation, the only day there is NOT an open Greenmarket in the EV is Thursday. Support our local farmers, buy from them!

I go to Union Square all the time, but the greenmarkets, of course, carry mostly seasonal produce, and pickings are bleak in February. And they are generally the most expensive option of all!

"There already is a farmers market on Sundays in stuytown"

Technically the market in the interior of ST, due to the zoning law, is considered a "resident amenity" for "residents and their guests only. But not to worry, that NYC zoning designation (R7-2) for the interior of STPCV is ignored as are many other laws and regulations in STPCV.