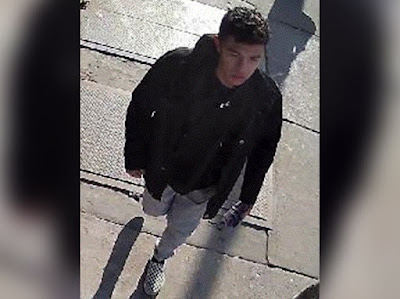 Police are searching for a suspect they say critically injured a 59-year-old man after punching him Wednesday afternoon on First Avenue near 12th Street. (Update: Readers say it was actually 11th Street near the Islamic Council of America.)
CBS 2 has a few more details:

Police say the suspect got into a dispute with the 59-year-old victim. Things escalated, and the suspect punched the victim in his left eye.

The victim fell to the street and knocked his head on the concrete. That left the victim semi-conscious, police said. He suffered a fractured skull and swelling of the brain, according to authorities.

The victim was rushed to Bellevue Hospital in critical condition.

Accounts of the assault did not include a description of the suspect (he appears to be wearing checkerboard slip-ons by Vans) ... the NYPD did release this footage last evening...

What is going on in the neighborhood? So many assaults like this in broad daylight. And I've seen no police presence of any kind in months.

I walked by the aftermath. There was a pool of blood on the sidewalk on 12th and First Avenue on the corner where the mosque is, and the area was roped off with caution tape. I hope they catch this guy.

I was walking by there too shortly after it happened and I can confirm it was outside the mosque - but Isn’t that 11th Street?

The police have been handcuffed by the Mayor. Ask him.

This is 12:13 back to clarify: I saw the blood and the caution tape (as well as the police) on the corner of 11th Street and First Avenue that day.

"The police have been handcuffed by the Mayor. Ask him."

No fan of BdB but besides the NY Post or the MAGA NYPD police unisons, let's get a link to confirm that it is, in fact, BdB himself, who has ordered the NYPD to "stand down".

The police--or, at least, some of them--have been "handcuffed" by their unwillingness to do their jobs if they don't get to wild out on the community with impunity. I guess if your best investigative tool is brutality, you would find actually solving crimes quite challenging. So much work!

Yes that is 11th St - absolutely NO 9th precinct presence. That food truck which has been anchored at the corner for over 5 years brings nothing but trouble to our block

^^ The Halal truck on the Southeast corner? What's wrong with it?

You’re a real racist to claim that the food truck is the cause of trouble. And FYI that food truck is anchored there since at least 2009. The only time it was gone was during Sandy.

The only TROUBLE that food truck brings is YOU to this forum. That truck has always been run by nice hardworking guys serving great affordable food for years. I’m there regularly and have never had or seen any “trouble”.

CAREFUL!!!
There have been a higher rate of violent crime in the East Village than any other neighborhood in Lower Manhattan. This incident, like the incident last week on 3 and 1 ave, happened during the day. There are just as much incident late at night (after sun down) but the victims are not reporting it. If you walk around at night, try to walk in packs, and if you see dubious characters, don't be afraid to cross the street. This is expected to be a very violent year.

Wait... why we hating on food trucks?

Great food from that truck, you should try it, especially the green sauce

The food truck has been there for years and never causes a problem. The problem is the young guys who walk around the neighborhood punching and attacking people. I don't know the stats, but it feels like this is happening more often in recent months.

Street bashings are nothing new. However this past year it seems there are more violent incidents of this type. In the bad old days it was queer bashing by guys who hated gays and then there was ethnic bashing against Blacks and Hispanics by guys trying to make their *bones*. In Brooklyn last year there were a lot of reports of Jew bashing. And just today there was a stabbing spree on the A train - all homeless victims. And then the subway pushers. These aren't street beefs. It's angry deranged people, and a lot of them, freaking out and acting out.