Medical procedures: A few moments filming for 'New Amsterdam' today along Avenue A 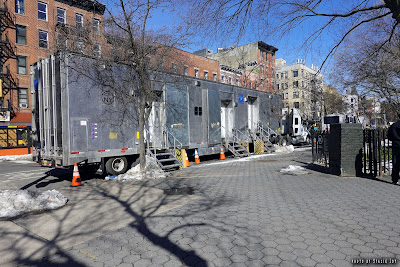 Crews for the third-year NBC medical drama "New Amsterdam" were out along Avenue A and several adjacent side streets today... EVG contributor Stacie Joy saw some of the filming action unfold on Avenue A at Fifth Street... (the ambulance was part of the shoot...) 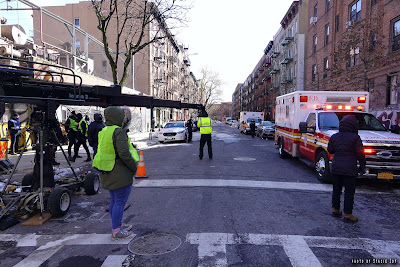 ... the graffiti on the Fifth Street side of the Con Ed substation was covered with a black screen for this scene... 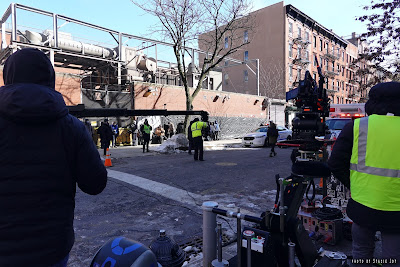 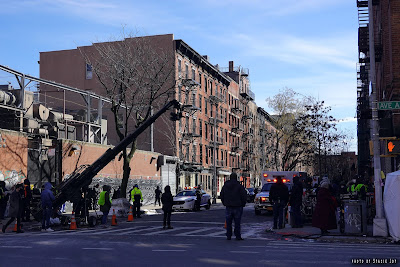 ... and a view on Avenue A outside Mast, Cafe Social 68 (try the croissants!) and Lancelotti... 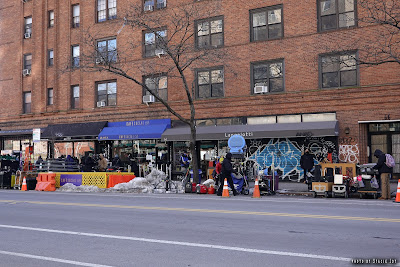 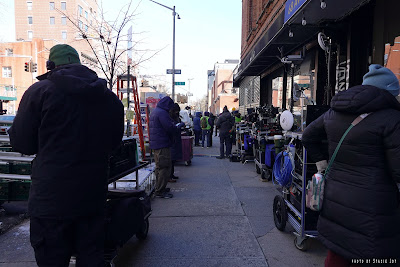 No word on when Fifth and A's supporting role will make it into the episode...
Posted by Grieve at 6:01 PM

From this I learned all graffiti is protected under Visual Artists Rights act (VARA). So they had to cover the actual graffiti onn5th and A with fake graffiti panel.
Also many many thanks to production for making this a neighborhood friendly filming. I didn't have to dig my car out!!!! Also ran many errands up and down A today and was able to get in and out where they were filming no problem. The helicopter didn't even hover for hours on end and was in and out quickly. Over the years I've seen many productions around here and this and Hawkeye were pretty painless and professional.

Hawkeye crew were the worst i ever experienced in the dozens and dozens of shootings next to anywhere i ever lived in, in the last 25 years. Really, a disgrace of a production. Not for nothing people threw glass bottles at them at 6AM.

Wow. I was on the 4th street location and that was pretty smooth although I guess they were doing g a lot more Round 12th Nd c

No production crew will ever beat Milos Forman - after finishing up his LES section of "Ragtime" in 1980, to thank the people of the block for the months spent building out the street to look like it was 1906, and weeks filming, he had trees planted on both sides of the street where before there had been nary a one. All the big leafy examples to be seen today are courtesy of that director, whose kind gesture has lasted for decades and impacted all of us living on East 11th between A and B.

But don't even get me started on the film crew from "The Super".