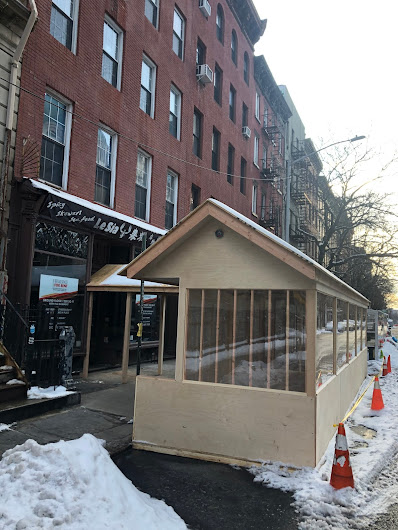 We received a tip last month that the Four Four South Village chain was opening an outpost at 11 E. Seventh St. just east of Cooper Square.
That has since been confirmed ... and as the top photo shows, workers have been building curbside dining for the restaurant that specializes in Taiwanese beef noodles. (Find their menu here.) No word on an opening date.
For now, the for-lease signs remain up in the window... as well as the banner for the previous tenant, Le Sia. The restaurant that served a Chinese crawfish boil was not able to survive the downturn during the pandemic. Le Sia debuted in January 2018.
As previously noted, No. 11 was home to Surma Books & Music for 98 years until June 2016. Third-generation owner Markian Surmach cited a decline in business and the expense of property tax and other charges related to owning the building. Public records show that the Surmach family sold the property to Icon Realty for $5.75 million at the time.
H/T Steven and Upper West Sider!
Posted by Grieve at 4:50 AM

a BUNCH of restaurant operators/owners continue to spew the mantra---'NYC is being unfair and constantly changing their VERY confusing outdoor dining rules'---to that i now call BS---75% of outdoor dining structures are COMPLETELY ignoring the 50% basic rule (the idea is NOT to build a new building outside but to protect diners with an airflow that is not constricted) :)

$5.75 million according to public records

75% in the East Village or citywide? Has this number been reported somewhere or is this your own estimate?

It's not Flushing-based. It's an international Taiwan-based chain with branches in Toronto and Chicago as well, with worldwide expansion plans.

"the idea is NOT to build a new building outside but to protect diners with an airflow that is not constricted) :)"

There are two reasons for building outdoor structures. One is to provide an entirely outdoor dining experience, for those times when indoor-dining is banned.

The other reason is to increase total dining space when indoor dining is at 25 or 35%. Having an additional structure allows the restaurant to get closer to their actual headcount necessary to at least break even.

Thank you. I amended the post earlier and didn’t get the chance to leave a reply to you.

Yes. I apologize for not responding to you right away after updating the post.

to peter cuce @11:26---i GUESS i was unclear---my OBJECTION is that OUTSIDE seating is being built with disregard to covid19 protocall(s)---a structure is suppose to be constructed with 50% of it OPEN to allow for airflow---if three sides are CLOSED---that is not 50%---additionally---windows DO NOT COUNT (simply because operators cannot be trusted to keep them open).....