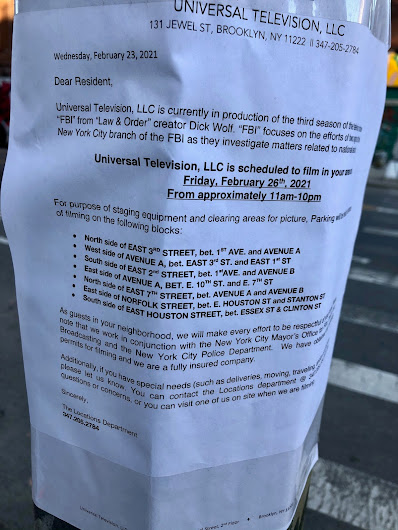 The CBS crime drama "FBI" is the latest television program to film along Avenue A and other parts of the neighborhood.
The posted notices highlight the crew's footprint tomorrow, with parts of Seventh Street, Second Street and Third Street seeing some "FBI" action.
The fleet of fake NYPD cruisers is currently parked along Second Street between Avenue A and First Avenue... 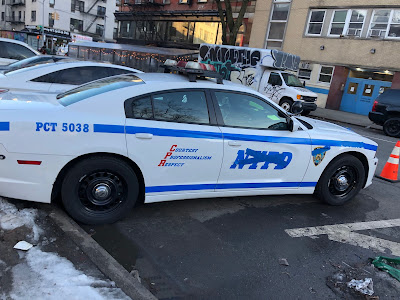 "FBI" is the third TV show to film around here this year ... following "New Amsterdam" and "Pose" (and "Hawkeye" this past December).
Posted by Grieve at 5:19 PM

What is with all the filming on this specific block and street area? Its one production after another there. They jam up the sidewalks with their filming equipment and forget about parking around there. Does the Mayors Office of Film and Television strongly suggest this area to film at for some reason? It seems strange.

City Hall has nothing to do with location scouting.

I'd say 1) production was shut down for months so like many of us in arts or entertainment we are now working double time to make up for the lost time
And Ave A is a lot easier to shut down for production than 1st or 2nd and a lot safer than c and a lately. Ave b is supposed to be open street

It's great to see this continued return to production activity. Quit being so negative people. This activity means jobs for the very hard hit entertainment industry and brings people and money to our neighborhood. You can deal with moving your car or having to walk a block out of the way.

Better to film a New York scene in New York rather than Toronto or Vancouver.

It might be for the sake of continuity in different scenes.

Agreed! It also brings some money to the equally hard hit restaurant businesses, who often get paid well for the interruption to business.