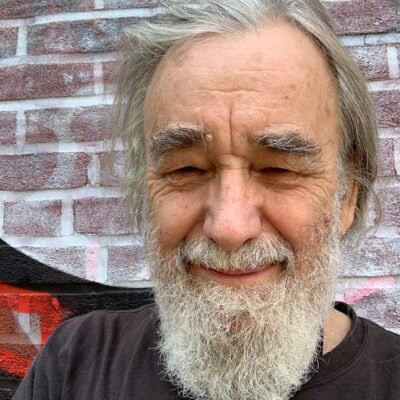 Paul Adrian Davies, an East Village mainstay since his arrival in 1978, passed away on the weekend of April 15. He was 69.
Originally from Cardiff, Wales, the affable "self-taught photographer" lived on Seventh Street between Avenue C and Avenue D.
Davies is known for documenting and publishing a book around Rolando Politi's installation of the Winter Flowers at La Plaza Cultural Community Garden on the SW corner of Avenue C and Ninth Street. In 2000, Politi began decorating the fence top with sculptures of flower-like whimsical (movable) assemblies created using packaging waste.
Davies also captured East Village-based scenes from the COVID pandemic in a series of photographs titled "Six Feet Apart But Still Together," featured at the Tompkins Square Library branch.
Here's described his approach to photography on his website:

I am particularly drawn to the "street" in the widest context of that word. The "street" could be a temple in India, a marketplace in Mexico, a protest in Barcelona or the New York subway.
I like to observe the activities that take place in these settings and look closely at how people present themselves and interact with one another. I also enjoy the random events which happen in these environments and create unique moments and images.
I am very interested in the dialogue which takes place on the "street" via graffiti, murals, scribblings, stickers and posters. I view this as a strong and important alternative to traditional communication channels such as print, television and even the internet.

Friends are planning a celebration of his life next month.

The memorial is Tuesday, May 10 at 5:45 p.m. ... at the Green Oasis Community Garden on Eighth Street between Avenue C and Avenue D.

If you hear of the plans please pass them along. There are several people that would like to be there.

Paul was a kind and talented man. This is very sad news.

We are planning a Memorial at one of the east village gardens. I will post here when we’ve figured out best day.

He was such a lovely person and added so much to our community.

You will be missed old friend.

He was a beautiful, spiritual person. Rest in peace my friend !

He was Ron. He will be greatly missed.

Truly a lovely man with an open heart and a gifted eye. I miss his mischievous chuckle, and the youthful sparkle in his eyes.

I have lived across the street from him since I moved to the block in ‘14. We would greet one another and he always seemed like such a nice guy. I always thought we would have that chat and get to know one another but, alas, it never happened. An opportunity lost. I wish his friends and family well.

Really sorry to hear this. I have lived on the block since 2007 and often chatted with Paul. Miss him.

Paul will be remembered by his friends at Green Oasis Garden (370 E. 8th St between C&D) on May 10 at 5.45 pm. Please come to say goodbye with the community he loved. We are all heartbroken. I still can't believe he is gone. Such a kind person and beautiful soul should have never left this earth in so much pain. May he find peace & love.

At Paul's Memorial on Tuesday, we will bring copies of his newly published photo book, Rock Fans. We will be asking for donations for the book ($25 or whatever you can) and all money will go to the Payne Whitney Clinic at NY Presbyterian/Weill Cornell Medical Center where he taught photography.