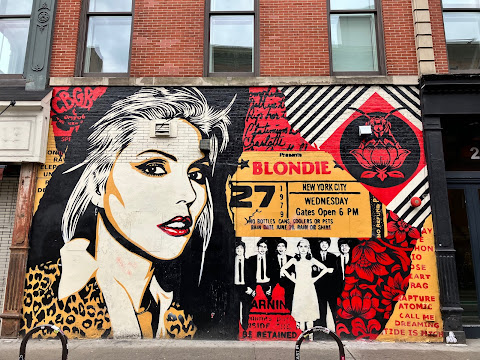 Photo on Bleecker at the Bowery from Saturday
Blondie co-founder Chris Stein has a book deal for his first memoir titled "Under a Rock."
Trade pub The Bookseller had the news the other day about the deal in the U.K.

Publisher James Gurbutt acquired U.K. and Commonwealth rights from Thomas Flannery at Vigliano Associates. Corsair plans to publish autumn 2023.
The book is billed as a "quintessentially New York story of the golden age of the East Village and the makings of international superstars."
Corsair said: "At its heart, 'Under a Rock' is a love story. The co-dependent bond between Chris and Debbie carried Blondie through their many tribulations: terribly misogynistic music scenes, greasy record execs, bitter bandmates, grueling schedules and hard-drug abuse abound. Chris lays it all bare, with blunt sincerity and humor. Ultimately, Chris and Debbie broke up, but their bond never dissipated; they remain the closest of friends, and continue to tour and promote their various projects together to this day."

In a tweet, Stein said the U.S. deal is pending.
Stein previously published two photography books: "Point of View: Me, New York City, and the Punk Scene" and "Negative: Me, Blondie, and the Advent of Punk."
Meanwhile, Blondie is touring now in the U.K. ... with U.S.venues slated for May and August (13 dates with the Damned, including Aug. 17-18 atop at Pier 17).
Posted by Grieve at 12:30 PM

Book could be a fun read but the Blondie/ Damned show is a pass. Love Deb, but she hasn't been able to go from a whisper to a scream in many a moon. When you can't shake your money maker or belt out the hits the way you use to maybe its time to hang up your Rock'n'Roll shoes.