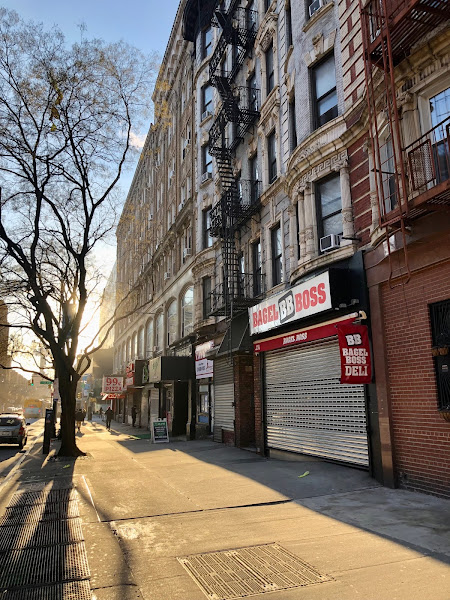 The Bagel Boss at 238 E. 14th St. between Second Avenue and Third Avenue apparently won't be reopening.
The address has been removed from the Bagel Boss website, and Google lists them as "permanently closed."
This comes after a temporary closure last October. At the time, BB management told us, "The location is temporarily closed due to gas and electric problems. We hope to open back up before the end of December!" The outpost never reopened, and it eventually showed up on real-estate listings.
On Saturday, a reader saw the gate open for the first time in months ... and the interior mainly looked cleaned out...

Bagel Boss had only just opened here last July.
The company, founded in 1975, has 14 locations in NYC and on Long Island. An outpost at 55 E. Houston St. (at Mott) also debuted last year. The store at 263 First Ave. remains in business.
Posted by Grieve at 4:50 AM

Man I wonder what those people were thinking. They opened something like three new shops all over the city. This one might have been open at most 3 Months. I never looked to see how busy they were but you open and close a joint within 3-5 Months? Who's got this kind of money to lose?

Their logo is aggressive and unappealing.

This place is so Long Island it's ridiculous. Someone needs to bring back H&H Bagels, they had the best onion bagels in the world.

Your wish is granted.
H&H is on UES and just reopened on UWS. Also at JFK, LGA and Moynihan