A break-in at Lucky on Avenue B

A man broke into Lucky at 168 Avenue B after close on Sunday night.
Owner Abby Ehmann told EVG contributor Stacie Joy that the break-in occurred just after 4 a.m. The bar has a rolldown gate. However, the burglar got into the residential part of the building and into the back garden, where he picked the lock to the back door.
Surveillance video shows that the man spent nearly 30 minutes inside the bar here between 10th Street and 11th Street. (Don't worry — this clip isn't 30 minutes long!)
He took all the cash left in the drawer ... as well as a $5 bill that someone had signed for Abby to staple to the wall. 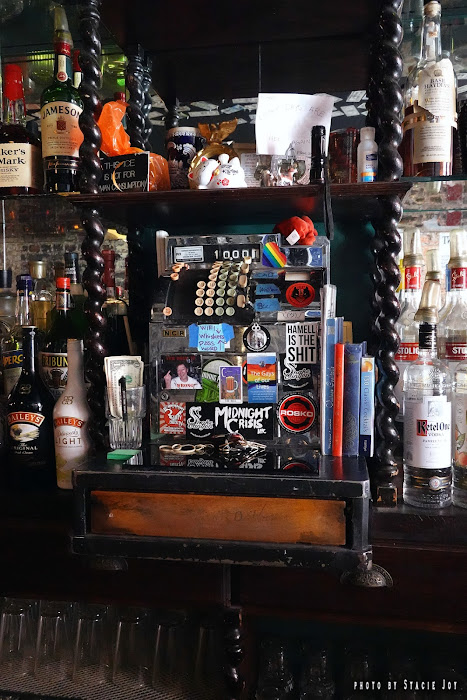 The burglar didn't steal anything else — and even locked the door behind him.
Police sources also said the same suspect robbed an unnamed business early that morning on St. Mark's Place.
Posted by Grieve at 4:59 AM

I hope they find this creep. Abby and her establishments bring so much good creative energy to the neighborhood.

Oh no! I hope they find that loser very quickly 😡

Yikes. 30 minutes? Did he pour himself a drink?

Such a thoughtful burglar to break in in a Sunday (slower) night and lock up when he left! Jennifer-jo