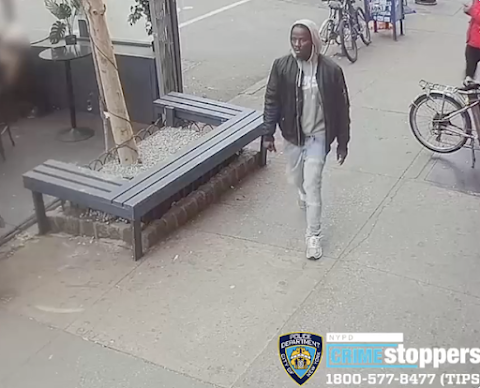 The NYPD has released surveillance video of a suspect wanted in connection to a stabbing on Avenue A near 10th Street late last Monday afternoon. (First reported here.)
As ABC 7 reported this morning, the suspect got into an argument with a 35-year-old man.
From ABC 7: "The victim was hospitalized at Bellevue Hospital in critical but stable condition. He had stab wounds to his left shoulder, right shoulder, chest, left arm, right forearm, left leg, left calf, and right leg."

We originally heard that the NYPD had a suspect in custody last week. They actually had a suspect identified. And the incident took place near 10th Street, not Seventh Street, per the above tweet.
Posted by Grieve at 12:00 PM

"The individual used an object to stab the victim."

Yeah, well, how else could he stab someone?

Someone is seriously hurt, nd you are making light of the situation! NOT COOL!

Someone was seriously hurt and the cops are talking like idiots. I'm making fun of the cops.

You do realize the cops do not want to just assume that the object was a knife before they know for sure what it was, right?. It could have been a box cutter, a screwdriver or another sharp object. It’s called proper police procedure.