[Updated] Report of a stabbing on Avenue A near 10th Street 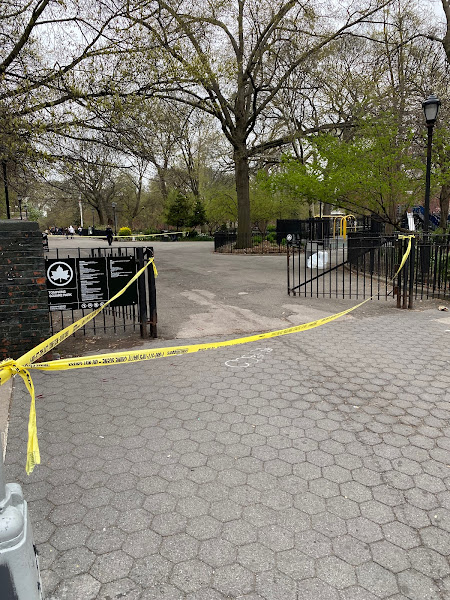 Photos by Steven
Updated 4/20
The NYPD has identified a person of interest. According to NYPD sources: "The victim didn’t cooperate at first because he was drunk."
We had heard previously that the two men knew each other.
Updated 4/25
Here is a surveillance clip of the suspect.
----
There are reports of a man who suffered non-life-threatening injuries after getting stabbed on Avenue A near 10th Street outside Tompkins Square Park shortly before 6 p.m.
Several EVG readers report that crime scene tape is up in parts of Tompkins Square Park ... at the entrance on Ninth Street at Avenue A ... and the area around Temperance Fountain... 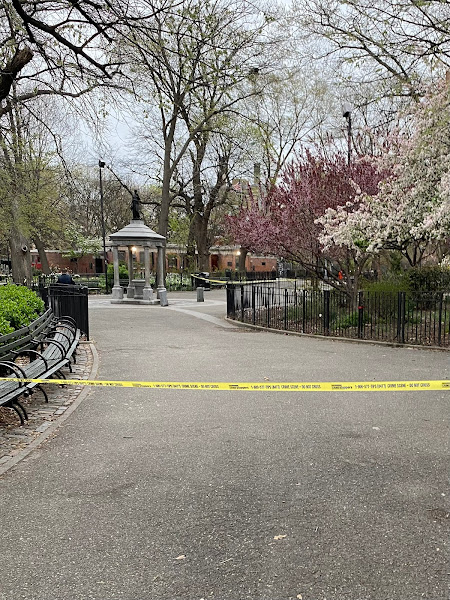 The Citizen app reports that the unknown victim "sustained leg and head injuries" and was being transported to the hospital.
This was the scene on Avenue A close to 10th Street... 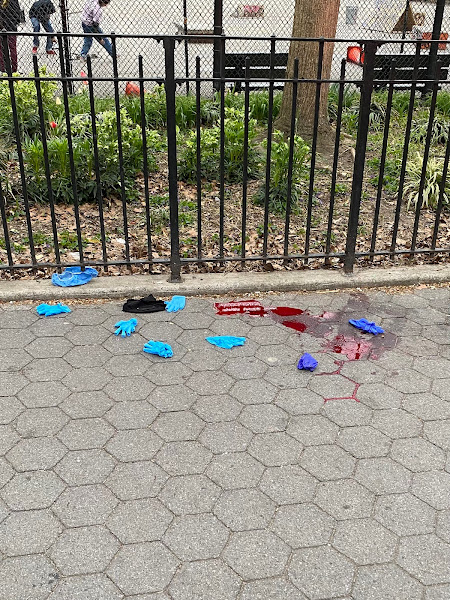 It's not known at the moment what led to the stabbing.
Posted by Grieve at 6:30 PM

Best guess, drugs/ hate crime/ relationship dispute. Not as bad as the late 80's when some guy in TSP hacked up his girlfriend, boiled her remains in a pot of soup, and fed it to the homeless, but it's getting there.

NYPD closed the park around 6:30

Very surprising to see no comments on this. Any updates?

I’m confused about why so many other topics — the closure of a business past its prime; a new “luxury” building; etc — gets so much attention from the EVG community, but this incident does not.

Look at the posts about removing tent cities — dozens of comments. But this one, nothing?

We were walking through with our kids when it happened, but didn’t see what it was- someone ran up and told us to take our kids to another exit. I definitely thought at least one person died by the way the scene was. Glad to hear that’s not the case, but surprised there hasn’t been more coverage. 🤷🏻‍♀️

The park has been sketchy as hell lately. We are back in the bad old days of violence that people won't understand until they are brutalized and traumatized. It's most certainly a junkie

Perhaps it was a drug deal gone wrong? I've seen at least three people shoot up around that area during the past week as I've walked through Tompkins. What is most disturbing about this crime is the time of day. In broad daylight. 6pm? Scary AF. Where is the NYPD when you need them?

Here is one of those situations where people ask where the NYPD were and their presence could have prevented this tragedy. Yet when the NYPD are around, people accuse them of harassing the homeless folk who are just minding their business. You can't have it both ways. Nowadays, the police actually have to wait till someone is stabbed or shot before they can act. Any act before the fact is flagged as harassment or profiling. Obviously these offenses do happen sometimes to unacceptable levels by a few bad cops but most times, it is a necessary tool to prevent tragedies like this from happening.

What are they going to say? Are they going to ask if this had something to do the tents? Gang related? Drug deal gone bad? People live to trash the cops. And protest removal of tents. But the needles and violence? No comment or protest.

I think police can be present and not harass homeless people. Also if all this is happening with the giant police budget they have then maybe it’s time to rethink how to deter crime.

I was there two hours earlier.... I haven't found a news report of this incident yet, so I'm glad to see it here and distressed about it since I live across the street from the park. It would be somewhat reassuring (although still tragic of course) to get a report that the people involved knew each other and that this wasn't another random attack or hate crime...

Obviously, NYPD cannot position officers everywhere at once, and for the most part, people who engage in criminal activity try to do so out of the line of sight of officers. Officers were no doubt nearby and came fairly quickly when called (if the crime happened at 6 pm and officers had already closed the park by 6:30 pm).

People cannot be locked up because someone suspects they might later break the law. That is a shortcut to tyranny. If allowed, politicians could order masses of people to be locked up because they might, for example, protest against some policy or another. Imagine if Florida's governor ordered the arrest of masses of self-identifying gay/lesbian/bi/trans people and their vocal supporters on the grounds that they might "say gay" on the grounds of an elementary school.

Crime prevention is a matter of building healthy communities where there is access to housing, food, healthcare, mental health services, drug rehab, and sustainable and meaningful work that pays a living wage, as well as community nurturing services such as art centers, good schools, after school programs, senior centers, local retail, etc.

I used to feel safe running in the park past 7 PM. Now not so much.

Agree with many of the above comments - people like to complain about everything (in this context, police, and pragmatic policies to deter violence and family-unsafe conditions) -- but when hit with reality (a stabbing in broad daylight, pools of blood, and half of Tompkins shuttered behind yellow tape), all the idealogues become mute.

The sad thing is, everything that is happening these days was so predictable, from approximately the time of Bill DeBlasio onwards. A lot of us predicted it, and only braced for worse after the anti-police protests in 2020. People can cherrypick all sorts of idealogically-driven arguments and data, but bottom line, this was all predicted by most folks with common sense and pragmatism. Civilized society takes time to break down, but historically it tends to accelerate when given leeway, and that is happening now.

No offense, and respectfully: this is the type of generational naiveté and idealistic thinking that got us here, again. These are feel-good sentiments and laudable ideas, but out of touch with the constraints of reality

One can debate ad infinitum about defunding the police, not defunding the police, or employing more health care professional to sort out the mentally ill but at the heart of this idea of a civilized society is how people interact with each other on a very basic level. I'm reminded of the words of Robert Heinlein who postulated that "Good manners are the lubrication of a civilized society." It seems to me that people today vent, rage, blow up and freak out at the slightest micro-aggression. The spillover from that leads to the daily knifings, shootings, Asian bashings, elderly assaults, and subway poop attacks, etc. which has become the new normal in the past few years. Sorry to say, but I don't see any end insight anytime soon.

Does anyone know if the stabber has been caught?

@XTC (3:51)
The ripple effects of Reaganomics (yes, we’re still feeling them) and an economy that continues to enrich the rich and drown the poor ain’t helping anything.

No one is willing to admit it but when the city allowed things to get so out of hand during the Summer of Floyd it opened a pandoras box of criminality that we're still dealing with two years later.

Why is this story not featured in any other news source (thePost, The daily News, ...)? Thanks for reporting EV Grieve. I saw the cops blocking Ave A around 6pm that day.

Crime has gone up nationally during the pandemic in correlation with the rise in health, economic and mental health problems. Blaming it on the mayor or BLM has no basis in data.