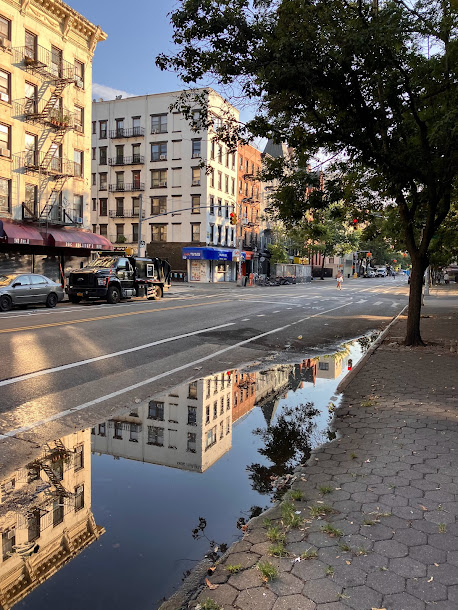 Some headlines from other sources this past week (with a random photo from Avenue A)...
• City announces a new "public-private partnership" to help unhoused residents (NBC 4 ... city news release)
• Columbia University graduate student is in the ICU with brain trauma; police believe he was attacked on the L after drinks in the East Village (NBC 4 ... ABC 7)
• Police searching for two men for questioning in the murders of Nikki Huang and Jesse Parrilla (Daily News ... previously on EVG)
• The number of legal evictions in New York City grew each month in the first half of 2022 (City Limits)
• A look at the backers of Yuh-line Niou and Carlina Rivera for the open-seat Democratic primary race in the new NY-10 district (The Indypendent)
• More about "7 Gardens" in East Village community gardens (Artnet ... previously on EVG)
• Fine-dining destination Kajitsu, which first opened in the East Village before moving to Midtown East, is closing on Sept. 18 (Instagram)
• Upcoming screenings for Andy Warhol's most often-discussed but rarely-screened films representing experiments in durational cinema — "The Chelsea Girls," "Sleep" and "Empire" (Anthology Film Archives)
• Coming soon: "Easy Rider" in 35MM (Village East)
• Some history of the "Physical Graffiti" building on St. Mark's Place (Atlas Obscura)
• Economy Candy turns 85 (Untapped New York)
• Russ & Daughters Café on Orchard Street reopens after extended pandemic-related closure (Gothamist)
• About the "Sweet Green" installation at Chinatown Soup (Hyperallergic)
• Netflix-approved immersive "Squid Game" experience coming to 81 Essex St. on the LES (The Hollywood Reporter)
Posted by Grieve at 9:30 AM

Chelsea Girls is insane. Quite possibly the ground zero for experimental avant grade cinema and video art. Empire to me is about using time, along with boredom, as a raw material to create a work of art. Sleep? What's more fantastical and impossible to document than one's dream state?..........Only Warhol could have come up with such ideas and presented them in the way he did.

Never Carlina! Not after she sold out our park to De Blasio.

HAPPY BIRTHDAY ECONOMY CANDY!!!!! last time i was in there it was just before easter and i "had" to wait in line behind an entire engine house of firemen purchasing baskets for their kids! here's to another 85 years!