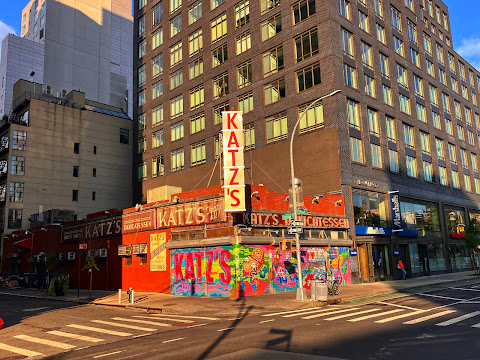 Some links to other sources from the past week (with a photo from this morning on Houston and Ludlow) ...
• Remembering Hunter Reynolds, East Village artist and AIDS activist (POZ)
• RIP Claes Oldenburg (CNN ... more background on his LES history at Off the Grid)
• Family looking for answers after murder of Jesse Parrilla (PIX 11 ... previously on EVG)
• Police seek man on e-bike accused of sexually assaulting 2 women in Manhattan early Saturday morning, including a 28 year old on Avenue A and Fourth Street (Westside Rag ... CBS 2 ... ABC 7 ...
• A $95 million lawsuit alleges sexual assault against famed East Village restaurateur Shuji Bon Yagi (The Post)
• City under a heat advisory through tomorrow night (Gothamist ... find a cooling center via this city map)
• De Blasio scores campaign cash for the Congressional District 10 race from subjects of his ethics probes (The City) UPDATE: The former mayor drops out of the race (Axios)
• Displaced Lower East Side Ecology Center heading now to Canarsie (NY1 ... previously on EVG)
• Jesse Malin pays tribute to his longtime friend Howie Pyro (The Village Voice)
• The MTA has put up a want ad for companies seeking to install platform barriers at three stations in the subway system, including the L at Union Square (The City)
• History of Mechanics Alley on the LES (Ephemeral New York)
• More on the Acne Studios handbag ads with the butt shots (The Post ... previously on EVG)
Posted by Grieve at 12:00 PM

Wasn't there a similar issue a few years back when IHOP was venting bacon smell into the apartments on 14th? What ever happened with that? Did IHOP have to re-do its venting system?

De Blasio dropped out…but still gets to use cash raised to pay off past debts.