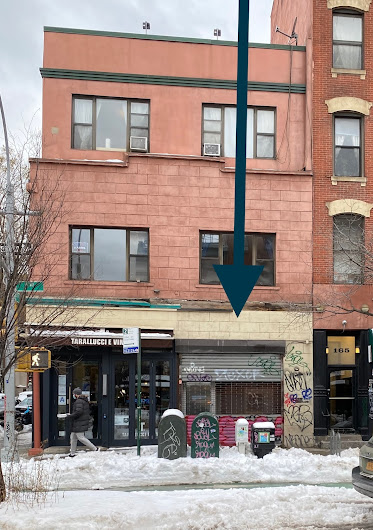 163 First Ave. just north of 10th Street is now on the rental market.
The space is notable to some local food aficionados for being where David Chang's Momofuku empire got is start .... first as the home of Noodle Bar (2004) before it moved a few storefronts away... later becoming Momofuku Ko for six years (2008-2014), which is now open in a larger space on Extra Place ... and then the first outpost of his Fuku fried chicken sandwich chain (2015-2018).
There was speculation that Chang would hold on to the space, as Eater noted after Fuku closed:

The space, near and dear to Momofuku as the location that kicked off Chang’s empire, will continue to serve as an incubator — though what else the company has up its sleeves is TBD.

Not much info on the retail listing, except that the space is vented for cooking, though all uses are considered.
Photo by Steven with assistance from EV Arrow 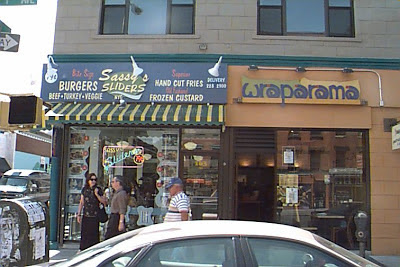 Email ThisBlogThis!Share to TwitterShare to FacebookShare to Pinterest
Labels: for rent, Fuku, Momofuku

I still remember the lines for that fried chicken sandwich stretching around the corner and up 10th Street towards Second Avenue. I wonder if it was really that good..anyone?

Gojira, the lines vanished with the novelty. The sandwich was good, not great, I'd say B+ for taste, B for value. I did not like that they would not take cash money. For my fried chicken fix I prefer Casa Adela or Kook. Turntable was very good too but we were among the few customers for lunch.

Fuku was decent. I'd take it over KFC, etc., but not over any good Korean fried chicken place.

I have some nice memories of eating in Ko a few times, though. Deserved the hype, at least back then (I haven't eaten at Extra Place).