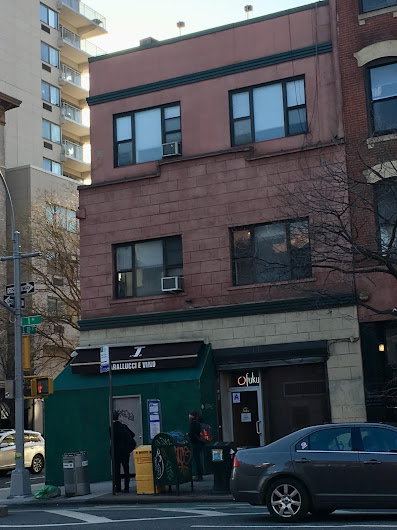 Momofuku founder David Chang is closing his first Fuku branch at 163 First Ave. near 10th Street at the end of the month.

The fast-casual chicken chain will close its original location in the East Village space that Chang has historically used as a concept incubator. It’s outgrown the tiny space... 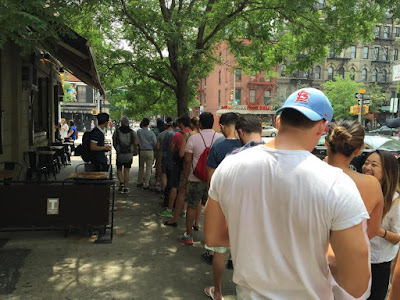 Since then Fuku has opened outposts in other NYC neighborhoods ... and in other cities.

The last day is April 30 for this Fuku.

Expect something else from Chang at No. 163.

The space, near and dear to Momofuku as the location that kicked off Chang’s empire, will continue to serve as an incubator — though what else the company has up its sleeves is TBD.

Okay. I commented on this months ago when I mentioned on here (EV Grieve) that I heard from reliable sources this venue was not returning. Another commenter chastised me and said to get a life and stop spreading rumors. Well, guess what? I told you so. And no one took what I had to say at face value. I wasn't spreading rumors. And I do have life. I know my wording might sound petulant right now, but this location has been under "renovation for months." It's obvious something new was taking over. Let's hope the new business will flourish.

Fuku is next door to Tarallucci e Vino, which is under renovation.

I remember when this site was the original Momofuku. No lines, a great place to duck in on a freezing evening for a nice ramen bowl and steamed buns with a couple beers. Of course, like all things it was "discovered" and became ridiculous. Same thing at Blue Ribbon downtown when it first opened--another great place not worth going to after it became overcrowded and crazed. Freeman's was sort of that way, but the trick there was to get in right after they opened. Congrats to all of the spots that became uber-successful, nicely done. I just can't bring myself to go to any of them anymore. Not one of the "wait on line" generations.

The Fuku chicken is good, not great, and definitely not a good value. The sandwiches have shrunk since they first opened, so now it's more of a snack than a meal. After the early hype and lines, business was lackluster, particularly by Momofuku standards. Eater calls that location an incubator for Chang, but if it is, maybe the eggs have died.
I never liked the cashless thing but maybe I'm a dinosaur in more ways the one.

Further evidence Tarallucci is not closing -- the friggin' awnings are still hanging, mate. Tarallucci is coming back, and you're going to print out this post and eat it!

So now that Chang has used that space to discover ways to charge exorbitant prices for Ramen, Korean burritos (ssam) and fried chicken, the only question is, what's his next victim?

Please, Mr. Chang, keep your hands off of peanutbutter and jelly sandwiches.

I always enjoy the archive (and recent ones too) photos of people standing in long lines for some new, trendy food item. I'd starve first. Judging by this photo the next generation of kids will all be born with the neck permanently bent forward.

i am happy a place that doesn't take cash is closing

i refuse to support cashless businesses

Re: cashless businesses: Have any of these owners (including Chang) ever tried to figure out if perhaps their business isn't doing well precisely BECAUSE it won't take cash?

The owners who decided that cashless is "de rigueur" should take a step back and just TRY TO QUANTIFY how much money they don't make, due to the many people who will not patronize a "no cash business". It's not rocket science to realize that if you serve BOTH cash AND cashless customers, you'll be doing more business and earning more money!

As more cashless food places open in the East Village, I have a message for all those owners: You won't get my money specifically BECAUSE you don't take cash!

I have a friend who sticks his head into cashless food places & asks "Still not taking cash?" and when they say no, he walks out. Owners ought to pay attention. He seriously would be eating from those places if he could pay in cash.

And isn't it odd that in some no-cash businesses, there's often a tip jar that only takes ... CASH!

PS: I note that Martina (which is cashless) has NO INDICATION outside that it is cashless - so what happens if you wander in and order and only have cold hard American cash on you? Do you walk out empty-handed and they're stuck with a food order they made that has no taker? [It's a rhetorical question.]