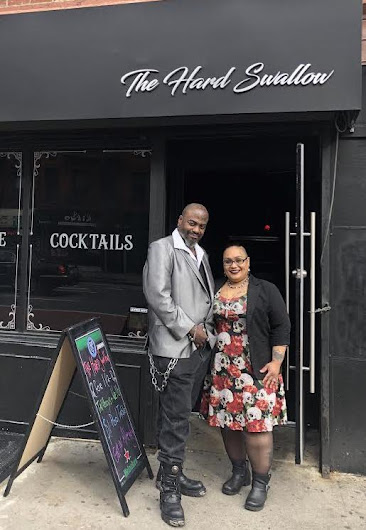 The Hard Swallow (aka Big Lee's) reopened last month at 140 First Ave. between St. Mark's Place and Ninth Street... and the bar is holding its grand re-opening party tomorrow (Saturday!) night at 8:30.

The no-frills bar had been closed for more than a year as husband-and-wife owners Leroy “Big Lee” and Maria "Sasha" Lloyd (pictured above) were locked in a legal battle with the previous owners. The Lloyds also had to go before CB3 and the SLA for a new liquor license. (This archived DNAinfo piece from March 2017 has all the background.)

The bar opened in the summer of 2015 in the former Spanky and Darla's space. Big Lee is a former doorman/bouncer at Hogs & Heifers as well as Coney Island High on St. Mark's Place (he is also originally from Coney Island).
Posted by Grieve at 11:00 AM

Damn, my man's got that NYC pedigree

Yet another bar reducing the quality of life of those of us that—you know—live here.

I'm Sasha one of the owners with my husband Big Lee, I take offense to this comment as we actually do live here and not just that, I was born and and raised here this is literally my hometown where my entire family including my grandmother still lives. Im raising my children here they also are born and raised here. Where are you from exactly?

“Hard Times Are Hard To Swallow!” That’s exactly why The Hard Swallow is such a welcoming spot for me and fellow local residents. As a NYC musician, I’ve enjoyed gigging there and remain grateful to Lee, Sasha and their courteous staffers!
The vibe’s authentic and I always meet people who remain supportive of our arts community!
Rock On!