East Village resident Susan Schiffman documents the apartments of rent-stabilized tenants living in the East Village for her Instagram account, I Am a Rent Stabilized Tenant. She will share some of the photos here for this ongoing EVG feature. 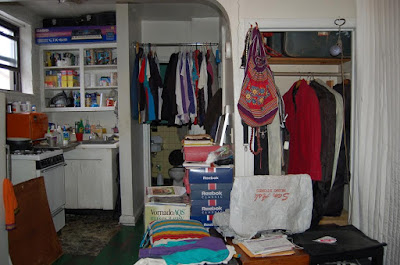 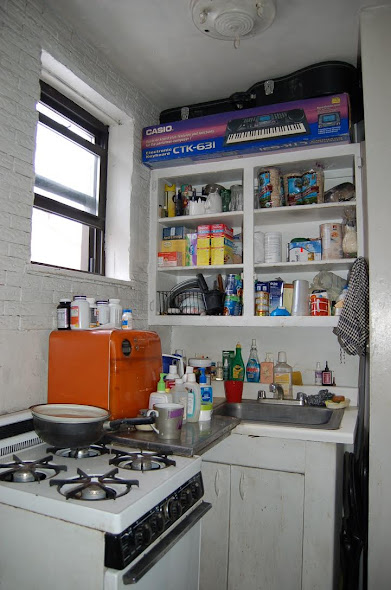 I moved to the East Village because I lived here once before and it was so convenient to get to where I wanted to go. I came to live in New York after having had five cars that all collapsed. I wanted to live in a place where I didn’t have to have a car and this was the place to be.

There is some kind of community feeling here, even though ... it is very busy. There is still a feeling as though you are in a neighborhood and there is a feeling of a village. And you can go from village to village.

I’ve lived in this apartment 38 years. I was very fortunate to get this apartment. I had gone back to England thinking that I wouldn’t be able to survive here and I came back to give it another try.

In the meantime the rents had all doubled. I thought there is no way I am ever going to get an apartment in the East Village. Luckily, two old hippie landlords decided to let this apartment out at the original price, which was half the price. I could just afford that. I got in here.

For the first 20 years that I was here most of my money went to paying the rent, like a lot of people. Thank goodness we have rent stabilization. If I lost the apartment it would be so long Joe. I don’t know what I would do. The best I could do to stay in this area — nowhere in the East Village — is to move out to somewhere like Bushwick and live in a little room and share a house with four or five other people.

This is my castle and I fight for it and make sure I keep it. People do grow old and die here in this building. There have been two old guys who have lived here most of their lives. The way they die is they walk up the stairs and then eventually they can’t walk up the stairs. And then they end up on the stairs, both of them. Someone comes along and they bring the emergency people and they get taken to the hospital and then they are gone. That might be me. And I wouldn’t be unhappy. If I die before my time spread my ashes on the Lower East Side. 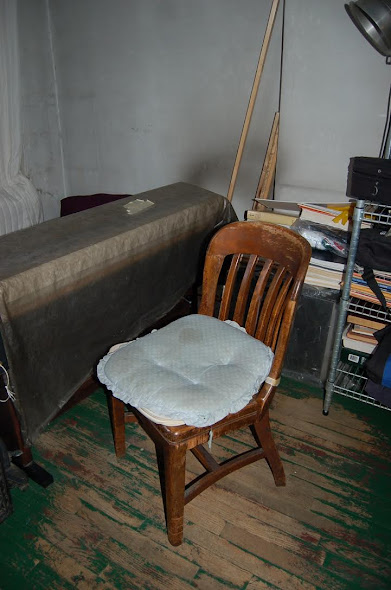 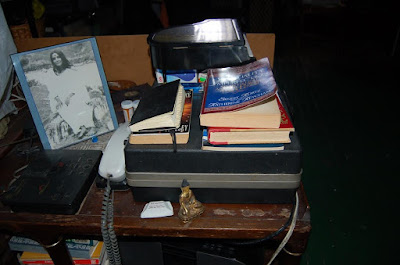 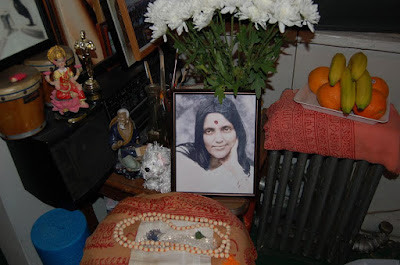 Like all good things that you find you have to know somebody. I was playing in a band with a drummer who knew somebody who lived in this building and he told him that there was an apartment available.

We both came down here together. He’s actually in town right now. He wished that he had moved here. He’s a New Yorker who can’t afford to live in New York. He has moved to Tokyo to live with his wife. He lived in Florida for two years.

I came down and I hung outside the landlord’s offices waiting. I was determined to get this apartment. I could tell they didn’t want to have me there. Eventually after awhile they said OK, we’ll take you down there. They brought me down here, I looked at the apartment and I thought wow, this is big for New York. When they told me the price, it was like heaven and g-d were smiling down at me. The landlord said “welcome to g-d’s little acre.”

There’s only one other rent-stabilized tenant in the building now. She has a court order to move out. She has not been living there. She has been paying the rent but obviously not all the time. There’s a court order in her door right now. She lived below my new neighbor here, the noisy neighbor. I’ve had no backup because she has not been there living below him. I’ve had no support. If someone is living there I’ll have some support.

I hate to see her go but she is living somewhere else with her boyfriend. I am the last one who is rent-stabilized. There are 18 apartments in the building. Every day, every night I am still very grateful after 38 years for this apartment. It has been very good for me. I’m a creative artist. I have developed my talents to the full potential what else can anybody ask for? I’ve found g-d for my own understanding. I have happy, loving people around me. This has been a great life. I’m happy to have moved here.

I had a beautiful neighbor for nearly 30 years. She was from Yugoslavia. She got laid off from her job and most of her Yugoslavian friends have moved to other places. It became a cold place for her. She moved back to Yugoslavia. I was really lost for the first few days after she had moved. It was like when my mother passed away. All of a sudden you realize that she was the best mother in the world and you didn’t realize how much you loved her at that moment in time.

Joni Mitchell sang, "Don't it always seem to go. That you don't know what you've got. Till it's gone. They paved paradise. And put up a parking lot." We used to go out to concerts together. Me being a musician, I used to hang out with the Allman Brothers, backstage and all of the other people who hung out with them, like Derek Trucks and Johnny Winter.

I had a good neighbor for nearly 30 years. I am very grateful. I guess I have to go through some dirt now and eventually [the noisy neighbor] will move out.

I like the fact that I’m on the top floor so I don’t have anybody above me. I can see the sunrise from the east pass over and go to the west. I used to be able to look out of that window and see the skyline but now there’s a building there. I get sunshine coming in. I can also see the moon. I used to be able to see the World Trade Center. I went on the roof and I saw it fall down. That was very sad. Now I can see the Freedom Tower. When you go on the roof you can also see the Empire State Building. That is all very nice. 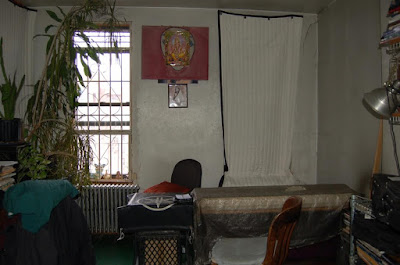 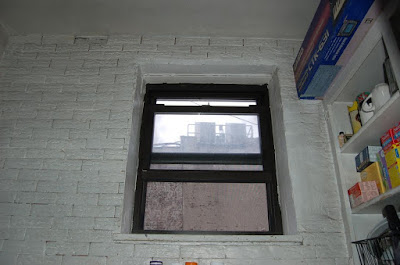 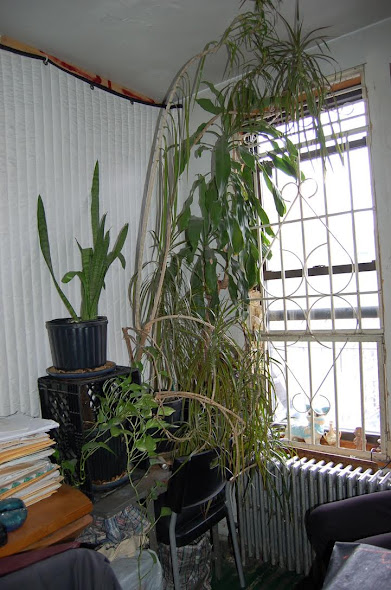 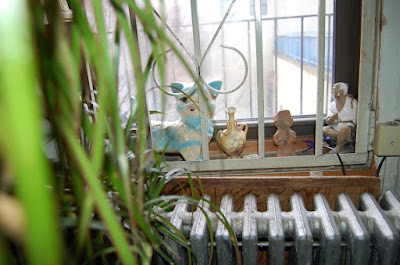 If you're interested in inviting Susan in to photograph your apartment for an upcoming post, then you may contact her via this email.
Posted by Grieve at 10:30 AM

Warms my heart. I love the first shot with the windowed kitchen and the beautiful arched wall. The clothes and I see the CASIO and guitar. It's very eighties. I love it.

hooray! perseverance and positivity pay off! sorry your neighbor moved away; i totally understand the hole that left and am wishing you all good things!

I too love to be able to just walk, and the sunlight is great. Your place is beautiful.

Having a rent regulated (controlled or stabilized) in Manhattan is like hitting the jackpot for most. It makes it possible for people to actually be able to have an apartment without having to live with strangers for roommates. You would probably shudder to hear the nightmare stories of roommates moving in and causing problems that never quite make it to the 6 O'Clock Nightly News programs...but you can be sure they exist.
Regardless, it is a bit nuts to think that these mostly small "apartments" with kitchens and bath facilities that are so small you are not sure which room you are in, are so highly prized. Walk up three or four flights of stairs several times a day and you will find another reason to think....why? Bottom line....the price. Without the low rent the EV would become a wasteland of the mundane.
Keep your eyes open for the April 28th meeting at COOPER UNION where the annual shouting match between the "roll back the rent tenants" and the "when will i get richer landlords" meet to hear what the NYHRC arbitration tells them what they will allow in rent increases for the next 1 and 2 year leases. Stay tuned...it should be a good one.