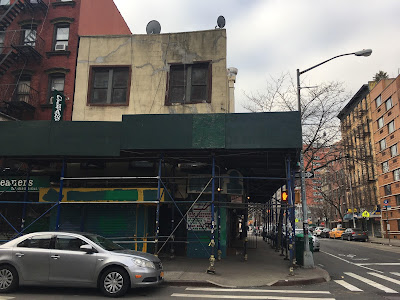 The sidewalk bridge on the southeast corner of Avenue C and Third Street (aka 32 Avenue C) celebrated its six-year anniversary last month... 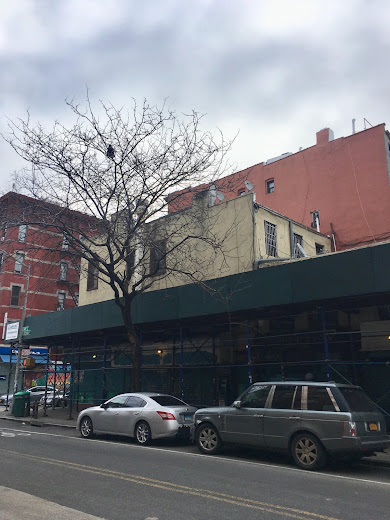 A full-vacate order has been in place since August 2012. To paraphrase the DOB, the building is leaning/sagging.

At one point, there were plans for this corner... with the filing of permits with the city in July 2005 for a new 6-floor residential building here. The city disapproved the plans in May 2006, and nothing more happened with the project.

Most recently, the owner — listed as Fairfax Management — filed a permit last fall with the DOB to "rebuild exterior walls; replace windows and sistering of floor joists to address" the various violations on file. The city disapproved this plan on March 14. 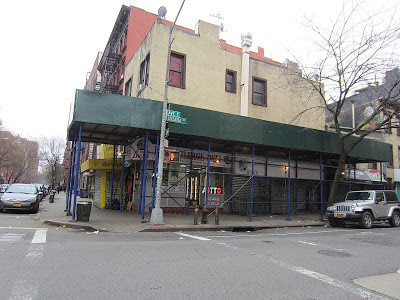 A sad situation. And what is the story with the scaffolding around Bracetti Houses, across the street? If you notice, it is not even flush with the building so what's the purpose?

I hate this semi-permanent scaffolding mania that seems to have taken over. Really damages the quality of street life.

I don't understand why 1) the city lets this happen for so long, 2) this city hasn't had this torn down, and 3) this site hasn't been turned into some new shiny development. same goes for the corner of Houston and B.

Now that I can clearly see what that building looks like above the scaffolding, I'll be sure to walk on the other side of the street.

The scaffolding would provide scant protection to pedestrians in the event of a building collapse.

There is a bit of street life enjoying that shelter.