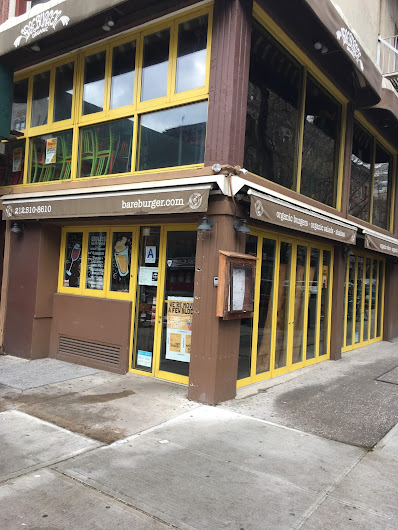 Bareburger is moving out of its corner space on Second Avenue and Fifth Street today ... for the short relocation down to Orchard and Stanton... 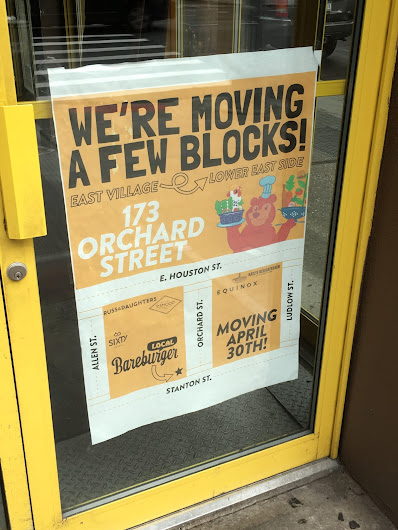 Matt Kouskalis, who owns and operates a handful of the city's Bareburger outposts, told me in February that escalating rents at this location were behind the reason for the move.

"So we are moving to a slightly smaller and cozier spot on the Lower East Side," he said in February. "We are sad to leave the East Village but our new location is only a few blocks away and our delivery area will remain the same!"

The asking rent for the two-level space (plus basement) is $25,000, per the listing.

Previously on EV Grieve:
Bareburger is leaving 2nd Avenue; new outpost slated for Orchard Street
Posted by Grieve at 4:19 AM

Email ThisBlogThis!Share to TwitterShare to FacebookShare to Pinterest
Labels: Bareburger

Really $25,000, why does anyone even bother to open a new business these days, because you will fail, go deep into debt and keep this farce going.

I echo the sentiment from 8:57. Why bother opening a business in the EV, let alone any other areas of NYC. The true culprits pertaining to the demise of our great city are the greedy landlords whose implausible demands have cast a pall with the neighborhoods we call home. 25K a month? Really? WTF? How many burgers and fries can one sell in order to make rent and staffs' wages, aside from any return on your investment or profit.

Its disgusting how many for rent signs I pass on a dally basis here in the East Village, not to mention in the West Village, SoHo, Midtown, even the Upper West Side, which was a haven for mom and pop shops. If this trend continues, and I know it will, Manhattan, along with the other boroughs will become unrecognizable; maybe it already is?

I liked Bareburger. Too bad they left. Who in the fuck will afford this new spot? Let me guess? A bakery or a noodle shop? Please.

There's this thingy called supply and demand, but considering all the
vacant commercial spaces why don't they balance? Building owners make zero when their spaces sit empty.

Big landlords have lots of spaces, any left unrented they write off the loss on their taxes until they get a chain in that can pay the rent they want.

" Building owners make zero when their spaces sit empty."
Maybe but they hit the jackpot when a national chain moves in.

The Bareburger will be next door to Rosario's...