Cleaning out the Three of Cups 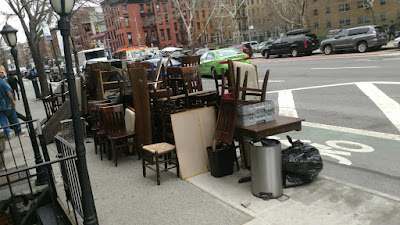 Three of Cups closed after service on April 1... and today, workers are removing some of the contents of the 25-plus-year-old restaurant here on First Avenue and Fifth Street.

An EVG reader shared these photos, noting: "If these are the new owners, they are off to a stellar start showing respect for their neighbors and general sanitation laws." (No word on who authorized this work.) 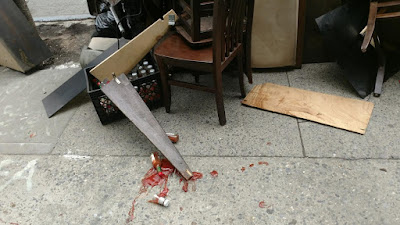 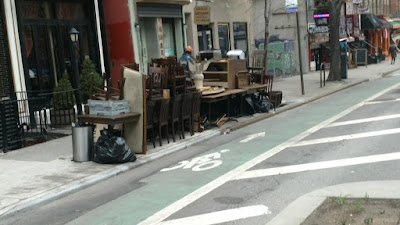 In announcing the closure, Three of Cups owner Anthony Barile wrote in part: "The reasons are many that we are at this moment, with all of them meaning that I can’t sustain it any longer." The pizzeria and Italian restaurant opened in December 1992.

Emmy Squared, the Williamsburg-based restaurant serving burgers and Detroit-style pizza, is expected to take over this corner space in the months ahead.

Previously on EV Grieve:
After nearly 26 years, Three of Cups is closing on 1st Avenue; Emmy Squared arriving next?
Posted by Grieve at 2:00 PM

Email ThisBlogThis!Share to TwitterShare to FacebookShare to Pinterest
Labels: Three of Cups

That's a broken bottle of heinz there. And what looks like half a booth obstructing the sidewalk.

Screw sarcasm. These guys suck. And obviously cheap. As much as I know, they can call 1-800-got-junk to get rid of this.

When does sanitation pick up on that block? Because that stuff is going to get looted by derelicts and those darn crusties. A lot of linknyc's are going to have al fresco settings.

I just got me some (fairly) nice chairs!

Pretty sure it is/was Three of Cups' responsibility to clean out the restaurant before vacating? Why is our instinct to point fingers at the newcomer so blinding?