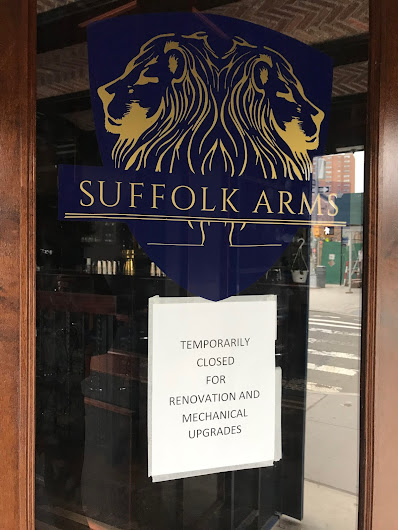 Last Monday we first noted that Suffolk Arms, the cocktail lounge on Houston at Suffolk, has been closed of late.

There's now signage on the front door noting the temporary closure for "renovation and mechanical upgrades." The bar's social media accounts have disappeared, though the website is still operational.

Neat Pour reported that Suffolk Arms "would reopen at a later date with a new concept, but the same staff." Neat Pour also had that co-owners Ruben Rodriguez and Giuseppe González are "at odds with one another."

The upscale bar, lined with portraits of famous New Yorkers, opened in February 2016.
Posted by Grieve at 4:00 AM