ICYMI: An interview with artists "who defined the East Village’s avant-garde scene" ... and other early-1980s influencers (The New York Times Style Magazine) 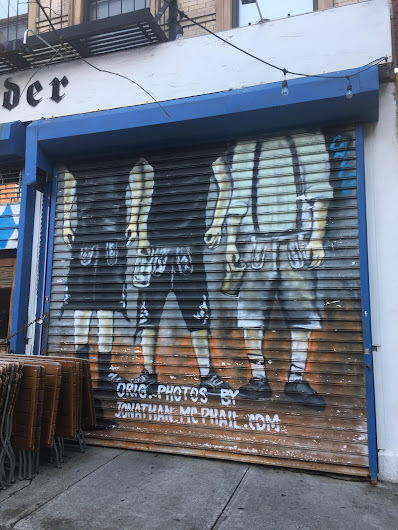 [That awkward moment with the gate at Zum Schneider on C]

Judge: De Blasio may be deposed if mayor had hand in axing city official (Daily News)

"Hypnic Jerk," an exhibit featuring the work of Gina Volpe (the guitarist for the Lunachicks), remains up through May 17 (Art on A Gallery)

Iggy Pop at his most ferocious (Dangerous Minds)

... and as previously reported, Coney Island Baby debuted last night at 169 Avenue A with a set by Murphy's Law ... as well as a special appearance by H.R. from Bad Brains... The venue's neighbor is the onetime home of Rat Cage Records and 171A, the illegal club-turned-rehearsal studio that produced records by Bad Brains and the "Polly Wog Stew" EP by the Beastie Boys.

Here's a look at the Coney Island Baby marquee, that went up yesterday... 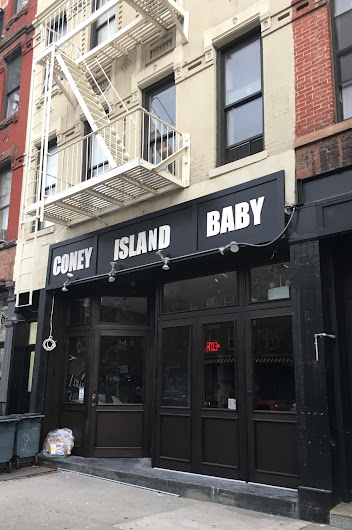 Brooklyn Vegan has photos from last night here.
Posted by Grieve at 12:00 PM

So sad about Joe Heaps. He was an EV fixture for so long. While he was always a gifted painter, the collages he made towards the end of his life were absolutely brilliant. It's worth posting a few on this blog. There are plenty floating around social media. Here's at least one link:
http://www.lunalunamagazine.com/blog/joe-heaps-nelson-art

RIP joe heaps nelson, a talented artist and an openhearted guy who lived life to the fullest!