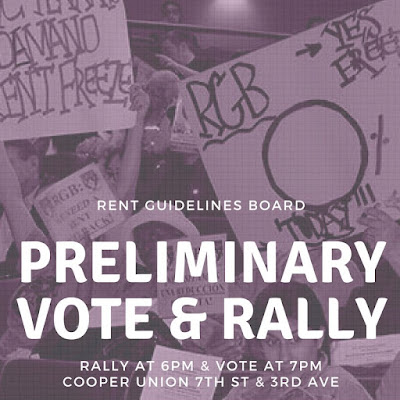 The city's Rent Guidelines Board (RGB) is holding its preliminary vote tonight to decide whether to seek increases for 1-million rent-controlled units in the city.

Members of the Rent Justice Coalition — including tenants, advocates and community organizers — as well as some elected officials will rally in front of the Municipal Building before heading to where the vote will take place — the Great Hall at Cooper Union.

The group will demand that the RGB freeze rents on rent-stabilized units to address the affordable housing crisis in the city. The Coalition released this statement yesterday:

While the Rent Justice Coalition counts past rent freezes as successes, data show landlords have been overcompensated for decades with high rent increases, including an 8.5 percent increase at the height of the recession in 2009. In fact, rent-stabilized tenants are rent burdened, with half of them paying about a third of their income for rent. At the same time, many low-income families pay as much as 60-70 percent of their income in rent.

A new report (PDF here) released by the RGB — showing that operating costs for landlords have gone up again this year — makes it seem unlikely that they will approve a rent freeze this year, per Curbed on April 18.

The RGB's final vote is June 26 at Cooper Union. Find the schedule, including all public hearings, right here.

The Rent Stabilization Association, which represents 25,000 landlords, says it will request an increase of 4 percent for new one-year leases and 7 percent for two years.

Previously on EV Grieve:
Rent freeze fight underway for 2018
Posted by Grieve at 4:20 AM

Email ThisBlogThis!Share to TwitterShare to FacebookShare to Pinterest
Labels: Rent, Rent Guidelines Board

Front line of the class war...