Questions, and concerns, remain over private security detail outside the former P.S. 64 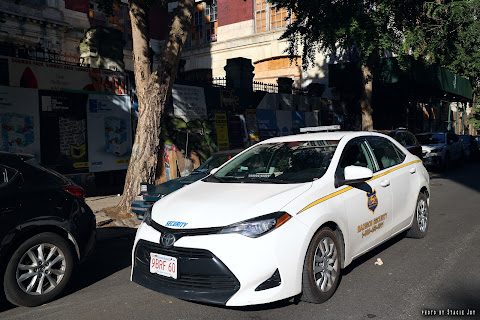 Photos and reporting by Stacie Joy
A security detail remains outside the former P.S. 64 (and later Charas/El Bohio Community Center) on Ninth Street between Avenue B and Avenue C.
As we first reported over the Memorial Day weekend, employees of the Massachusetts-based Madison Security Group started to watch the property... and near where several unhoused residents have been living under the sidewalk bridge in recent months (and the site of several controversial sweeps via city agencies).
There was speculation that the security was there to watch the tents under the sidewalk bridge, perhaps hired by nearby residents concerned by their presence. One local resident told us: "A Madison Security car was stationed alongside the encampment all last night with its lights flashing at them."
However, EVG contributor Stacie Joy spoke with one of the security guards, who said he was explicitly there on eight-hour shifts to monitor the building and serve as an impediment for people attempting to sneak inside the long-abandoned school-community center. (There have been reports of kids partying and other activities inside the property.)
The security guard said that he did not care about the tents or the Christodora House — the former P.S. 64 was his only interest. He also stated that he didn't know who had hired them.
Ownership of the property is in transition. In January, Supreme Court Justice Melissa Crane ruled that Madison Realty Capital could move forward with a foreclosure against building landlord Gregg Singer after years of delay.
Madison Realty Capital reportedly provided Singer with a $44 million loan on the property in 2016. Court records show that he failed to repay the balance by its maturity date in April 2016, and by that September, the lender filed to foreclose, as reported by The Real Deal.
Singer, who bought the property from the city during an auction in 1998 for $3.15 million, has wanted to turn the building into a dorm, though those plans never materialized. There has been a call to return the building for community use in years past.
As for the security, we witnessed the Madison car leave Ninth Street and drive around to the 10th Street side of the building, though the detail didn't remain there. An unmarked NYPD vehicle also stopped by on Ninth Street, yelling at the security guard seated in the car about being too close to a fire hydrant.
The security has also impacted the Trinity Lower East Side Lutheran Parish across Ninth Street. Since 1986, Trinity's Services And Food for the Homeless (SAFH) has provided lunch for 200-300 people each weekday. However, church officials say the security detail on the block has kept some people in need from coming through.
"While I'm happy to see that security has returned to keep the building safe, the constant presence of vehicles with flashing lights and guards in bulletproof vests has definitely been a deterrent to some of our soup kitchen's guests coming to receive food and assistance," Trinity's Rev. William Kroeze (aka Pastor Will) told us. "Many of our guests are undocumented and have complicated relationships with law enforcement, and they can't readily discern the difference between law enforcement and private security. It's important that Trinity always be a place of sanctuary and refuge for those most on the margins of society, and I'm concerned that for some of our guests, we are not such a place at the current time."
Meanwhile, two tents remain under the sidewalk bridge. There were six-seven tents at the peak this spring, with residents numbering up to 10. 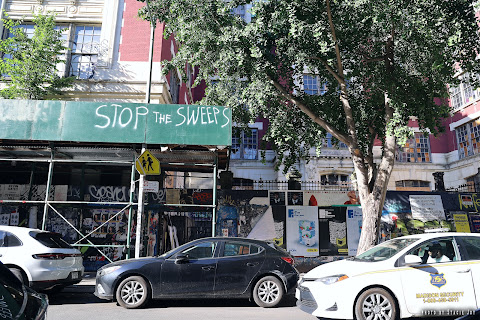 The museum of Urban Reclaimed Space is doing more art shows at See Squat and WW3 Illustrated just did one too in a garden nearby where War In the Neighborhood about Umbrella House squatting years ago was for sale. Glad to see they are stepping up to the plate to help the houseless, support soup kitchens and reclaim Charas. Forget housing the poor need more art shows.

The people in those tents are not the poor who need housing assistance. There are plenty of people who do. Completely irrelevant comparison with art shows.

This third-rate, rent-a-security-uniform outfit circles the block seemingly endlessly in their early model, out-of-state registered vehicle. And they idle and idle. I'm surprised we havent heard more from our neighbhors who seem most avidly into reducing the impact of automobiles on our immedidate environment. Best, JG

If the rent-a-cops can stop teenagers from throwing rubble from the roof onto the sidewalk that will be a plus.