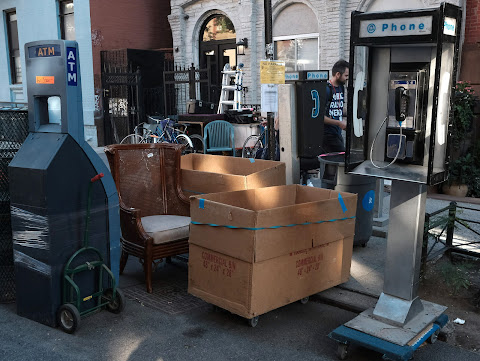 Photos by Derek Berg
Crews are setting up for a production with the code name "Yogurt" here on Seventh Street between First Avenue and Second Avenue.
It's a TV series with a retro vibe, given the assembled 1990s-era props here ... and NOT TRASH! 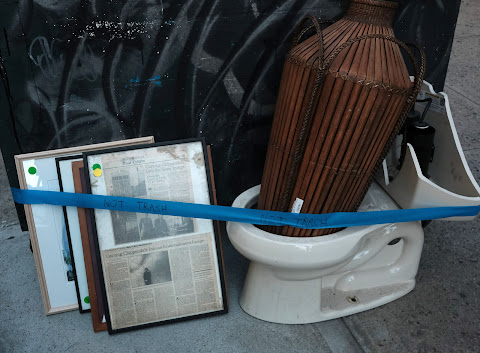 Anyway, the crews will be filming around here ... we saw notices on Avenue A... the Bowery... among other places. And we'll see if we can uncover what "Yogurt" really is (ASIDE from a popular food produced by bacterial fermentation of milk).
Updated 12:36 p.m.
Thanks to Emily, via the comments. The series is called "Up Here."
Here's more via Deadline:
Former Good Girls star Mae Whitman has been tapped as the female lead in Up Here, Hulu's musical romantic comedy series from Tick, Tick… Boom! and Dear Evan Hansen writer Steven Levenson, The Carmichael Show's Danielle Sanchez-Witzel, Hamilton director Thomas Kail, and the Frozen and WandaVision songwriting duo of Kristen Anderson-Lopez and Robert Lopez.
Posted by Grieve at 11:00 AM

It's a Hulu production called Up Here (https://deadline.com/2022/03/mae-whitman-star-up-here-hulu-musical-series-seven-levenson-thomas-kail-1234985274/) they're shooting all over the neighborhood, and were in my building on the LES yesterday.

Dear Evan Hansen writers should be banned for life