A new Korean concept for the Oiji space on 1st Avenue 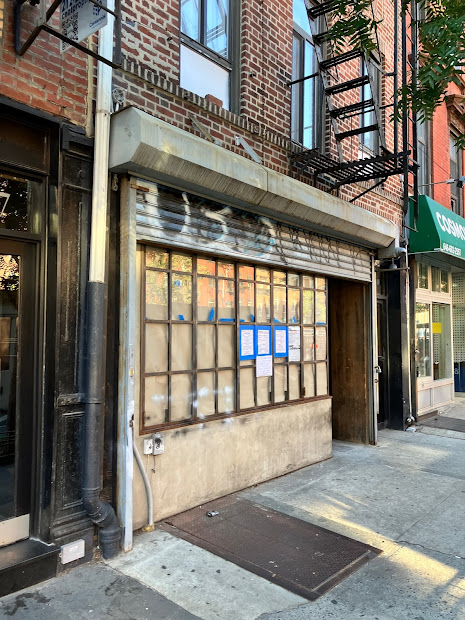 Updated July 1. The CB3 questionnaires are now online. The new restaurant is NOT affiliated with the previous tenant, Oiji — despite the fact that the person collecting signatures for the new concept told us so. Kihyun Lee, the founder of the successful Hand Hospitality, and Hand Hospitality partner Jinan Choi, are behind this venture.
----
This spring, the owners of the well-reviewed Oiji on First Avenue opened a new, larger restaurant called Oiji Mi on 19th Street near Sixth Avenue.
Since then, Oiji at 119 First Ave. between Seventh Street and St. Mark's Place has remained closed. It was unclear what the owners, Brian Kim and Max Soh, would do with the space.
The other day, a rep was outside No. 119 collecting signatures supporting a liquor license for a new Korean restaurant here... 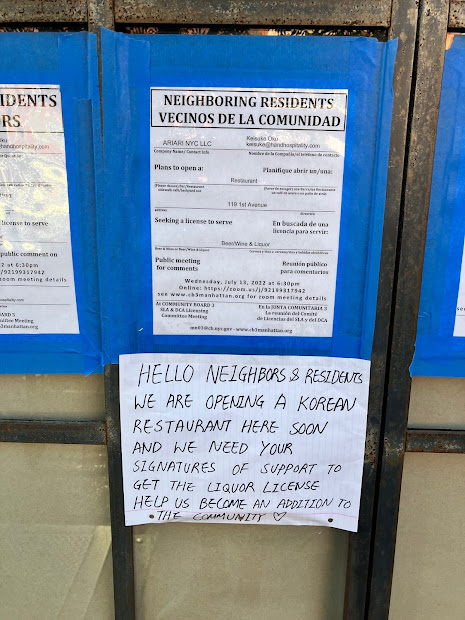 We were told that the Oiji owners are behind this new concept. Why the need for a new liquor license? There's a corporate name change that requires an updated license.
The applicants will appear before CB3's SLA committee this July 13. The questionnaires for this meeting aren't online just yet.
Oiji opened here in the spring of 2015 and drew praise from Pete Wells and others.
Posted by Grieve at 5:00 AM

Email ThisBlogThis!Share to TwitterShare to FacebookShare to Pinterest
Labels: Oiji

Great owners who have put out great food here in the EV. Fully support the new liquor lisc.

Honestly this feels like a betrayal. Oiji was awesome and a great part of the neighborhood. They'd always talk up their upcoming new place but of course never hinted that its opening would trigger the demise of the beloved original. The way they've talked up the "luxury" ingredients at the new joint, suggesting the original felt out of place in the EV, is odd; they were always packed. Still, wishing them well.

I walked by the other day and was surprised to see they had closed. While I couldn’t dine there frequently, I did request birthday dinners and they helped my fiancée facilitate a surprise engagement evening that started with dinner there…fond memories. On another note, why don’t they write on the sign that the owners of Oiji are opening this new Korean restaurant. I might not sign for any old restaurant to get a liquor or wine license but I would have supported had I known.

Dok Suni's was a good concept!

As long as they bring back the Potato chip ice cream dessert. I'm good

Dok Suni was the real pioneer of "modern Korean cuisine" in the neighborhood. Great restaurant.