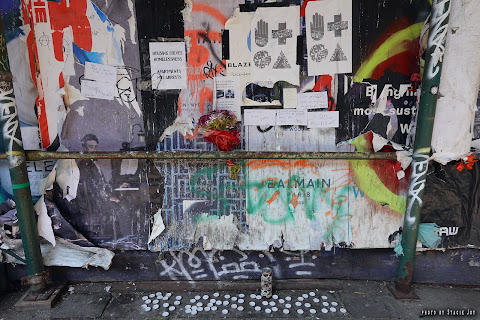 Photos by Stacie Joy
Friends came out today to pay their respects to longtime LES resident Jose "Joe" Hernandez, who died late last week. He had been hospitalized with liver disease. Hernandez was 71.
In recent months, Hernandez was among the handful of unhoused residents living in tents along Ninth Street between Avenue B and Avenue C, a stretch of sidewalk that has been a frequent target of the Mayor's encampment sweeps. (This was at least the eighth time in recent months where the city conducted a sweep here.) 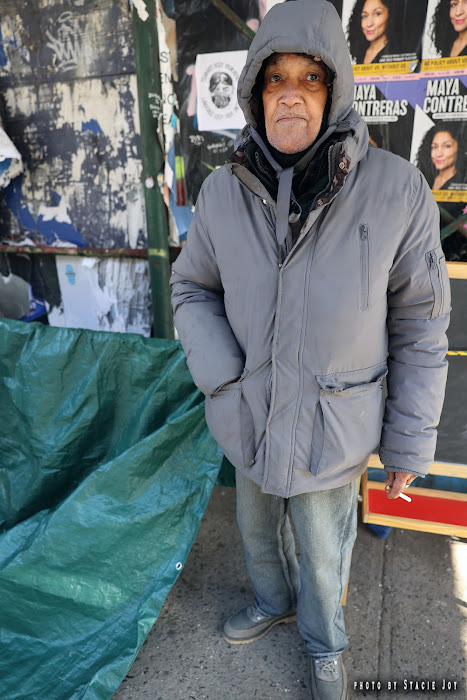 Hernandez, pictured above, told this to EVG contributor Stacie Joy in April:

I've been here for four months now. I am looking for a one-bedroom apartment for my wife and me. I'm retired now. I was a superintendent and building manager for buildings on the Lower East Side. When I was younger, I worked for the Board of Education on Eldridge Street and Forsyth. A friend of mine was sleeping here on Ninth Street, and he was leaving his tent, so I took it. I get a pension and Social Security. Being homeless is not easy, including with the police department. They are very rude. They want us out of here. My wife is Amalia Jordan; we're common law. She’s staying at Masaryk Towers.

During the vigil today, the NYPD and other city agencies returned to this sidewalk space and tossed the belongings of the individuals here.

Here's more from 1010 WINS, in a bad-look story for the city administration, "Cops sweep East Village homeless encampment during vigil for dead resident."

Mourners, including residents, neighbors, activists and a reverend from the church across the street, were outraged that police had chosen to carry out the sweep during the vigil.

After police and sanitation workers had finished destroying the camp, the vigil continued as planned, though maybe tinged with more anger and bitterness than it otherwise would have been.

As 1010 WINS noted, "After getting robbed twice in city shelters, Hernandez decided he preferred to live on the streets — where he spent his final years as his health failed."

He lost all his clothes and stockpile of food during a sweep in March.

"The sanitation truck stands there, and they start throwing everything in the truck," he said. "I was living there… They throw all the stuff out, clothing. They were begging but they didn't care."

Hernandez's "loved ones remember him as a kind, gentle and loving person, who, despite having very little, took immense joy in giving."
Posted by Grieve at 8:04 PM

This story is heartbreaking, infuriating, vulgar... the optics... shameful.

This person was a senior with a pension and social security. Why was he on the street? Why aren't people protesting shelter conditions? Why doesn't anyone ask basic questions?

How is this a bad look for the city? Should people be allowed to live in tents on the sidewalk and die from substance abuse? Are we not supposed to mention that?

This is absolutely true, but the story makes it sound like this happened with no warning, like an ambush. These exact people have been asked for leave this particular spot many times and they refuse. They have been offered accommodation going even beyond the regular shelters. They are warned that the camp will be cleared on particular dates. Each time, instead of moving to a less controversial site, they return over and over. Not because there is nowhere else to go, but because this is the closest site to the church fridge where they can get first access to the free food (before other homeless people).

"Should people be allowed to live in tents on the sidewalk and die from substance abuse? Are we not supposed to mention that?"

Not if you're not doing it in good faith, which is pretty obvious. You don't care whether they live or die--you just don't want to have to see them.

Old folk like me rioted in the park when this started in the 80s. Young folk complain on line and pay $5k per month in rent. This City is awful. I’d move if I had the means.

I repeat l, old people like me rioted in the park when this shit started. Young folk complain online. I’m too old to riot.. it’s your turn.