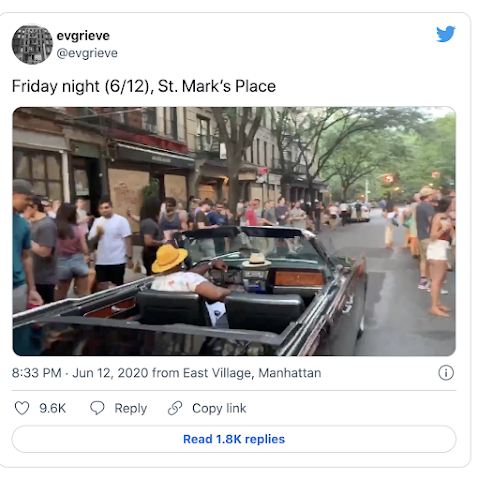 This video clip via the EVG Twitter account is from early Friday evening on June 12, 2020... on St. Mark's Place between Avenue A and First Avenue...

People viewed the clip more than 5 million times... with news outlets in the U.K., France and Japan asking permission to post the video.
And among the retweets...

Don't make me come down there... https://t.co/OeVGMW7LEO

Earlier this week in June 2020, NYC reopened for the first time with workers in construction, manufacturing and retail being allowed to return — this after a nearly three-month lockdown, giving reason for some hope.
Many Twitter users condemned the actions of the partygoers on the street, many of whom were not wearing masks... and at a time when some residents were still wiping down canned goods purchased at the grocery.
In June 2020, bars and restaurants were still barred from allowing patrons inside but were OK'd to dispense to-go drinks. Eight days later, on June 20, NYC launched its Open Restaurants program, allowing restaurants to expand to sidewalks, curbside spaces and backyards.
Posted by Grieve at 8:33 PM

I remember this happening it was all over the news. Every news channel had this story.

The fact that they're still closing off this street and and having the b are and restaurants all over the street is unacceptable. Nobody wants a circus outside their window and the streets should be kept clear for transport.

Wonder how many of those people have long-haul covid now? It's a case-study in how moronic & selfish people are, IMO. And a good example of why we're still dealing with this as a daily concern two years later.

I live nearby in a building near here that these finance and NYU kids pay $7k a month for the rebuilt "luxury" apartments. You know the ones with tiny bedrooms and a "living area" with a luxe kitchenette in it. Once they live here for a year they either wise up and move to cooler NYC environs or back to where they come from. All of them left during the shutdown. In fact whole buildings looked empty but for a couple of apartments with lights on during lockdown. Then they came back to town and don't wear masks not having been traumatized by seeing refrigerator trucks outside of funeral homes being loaded up with bodies everyday or watching friends die. And it has been that way every Covid wave since. No regard for others. So many people I know have had covid this past month, my building is full of it and still no masks. Tragic.

@3:09pm: I'm so sorry that you are living in a building with that many careless/uncaring people in it. But, as you described, these are the young grads who overpay (or the bank of mom-and-dad overpays for them), and they feel absolutely ENTITLED to do anything without regard to anyone else. I find it disgusting.

In my experience, they don't think about (or care) how their behavior affects others (especially others who are not JUST like them, meaning: older people, etc.).

I still wear an N95 mask every time I leave my building. I don't care how hot it is outside; I will not let the most careless people in the city undermine my health.

Re 4:47 "I still wear an N95 mask every time I leave my building. I don't care how hot it is outside"
You have the right to do what you want, as its your body and your choice, others have the same right.

It was definitely more careless in early 2020, with scientists and medical professionals not entirely sure of the modes of transmission.

My peeve these days is people who don’t respect buildings/lobbies/storefronts that are still trying to enforce indoor mask rules. Honestly, it’s not that hard to put on a mask for two minutes when you walk in, interact with the doorman, get your package, and get to your apartment - especially when the staff is masking up. It’s a matter of respect and acknowledgement of the situation…

Back when Cuomo was riding the wave of his fabricated image as some kind of front line hero. Amazing how much that pathetic man has crashed and burned in just two years. Good riddance.