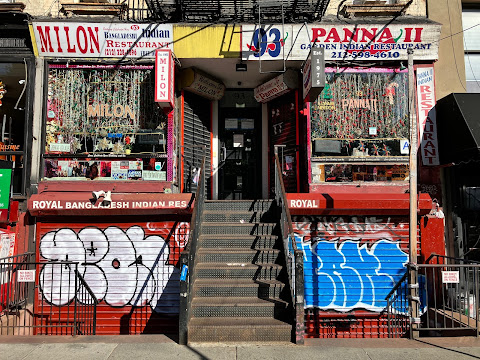 Royal Bangladesh on First Avenue at Sixth Street has not been open for several weeks, per multiple readers. Yelp also lists the restaurant as closed.
EVG contributor Stacie Joy caught this shot of the rolldown gate open over the weekend ... showing a for-rent sign on the storefront... 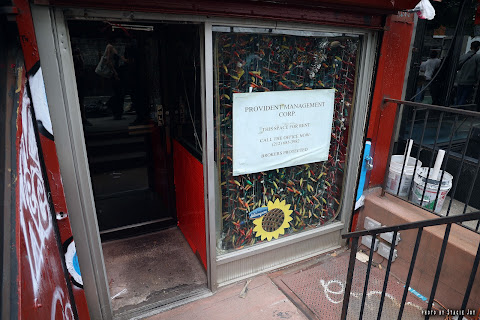 The colorful BYOB standby on the lower level here first opened in 1978.
With this closure, Panna II, who runs Milon these days, is the sole restaurant at the address...  bringing an end to the era of theatrical hosts trying to get passersby to eat in their establishment, insisting that their food is superior.
This article at 6sqft has a nice recap of the restaurants here; Eater too.
Posted by Grieve at 5:30 AM

After Milon closed (what's there now is an extension of Panna) I felt like this was the end of an era... now there's more evidence of that. This sucks.


I still miss Milon a lot.

The corner restaurant space (formerly Mancora) has been vacant for at least a year. As a long-time resident of this block, I dread what could replace these businesses.

Awww they had the best garden dining area ! That said the food from these places has gone downhill for a while now

I don't think there's any live music on 6th st anymore which is too bad. If a restaurant does bring back sitar and tabla players support them with your dining dollars!

Food has not been great for many moons. One humid summer day my very ordinary chicken sag was served with a side of moldy naan.

I am glad I got a chance to dine at Milon twice. An unusual and festive place to eat, to say the least. Makes me sad it is no longer exists and that I am old enough to remember several hundred places that have closed. All things must past, especially in NYC dining and retail.

It’s sad to see there’s this place go, but you have to admit that the Indian restaurants on First Avenue were among the worst on the block if not the entire city. The only thing that kept them going was the millions of Christmas lights that attracted the unknowing NYU students or groups of tourists passing by. Plus they had buskers standing on the sidewalk ushering people in. Yet somehow outlasted superior Indian restaurants like Mitali, Sonali and Haveli, and one still survives. What they offered was not great food but a festive place to gather and enjoy affordable meals, something we are losing more of every day.

We got married in their “garden” tent on a 100 degree plus day in 2010. The food was wonderful (and climate appropriate) and the decor was perfect! We will really miss anniversary dinners there and we will never forget when they brought out our cake (from sunshine) that they had covered in candles for us to blow out!