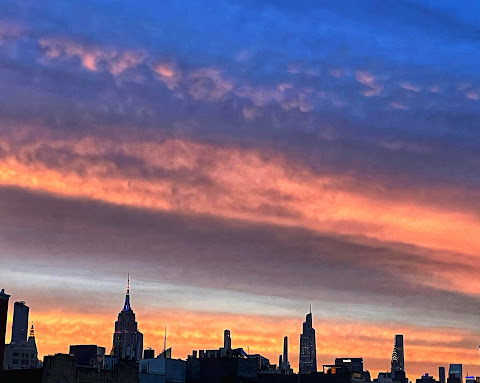 Midtown view Friday evening
• 19-year-old woman was attacked and stabbed early Friday morning at the Delancey Street subway stop (CBS 2) ... Police released video footage of the suspect (ABC 7)
• A year after state lawmakers established the Housing Our Neighbors with Dignity Act (HONDA), not a single hotel has been converted to housing in New York City (City Limits)
• A tour of the "stunning" Lou Reed exhibit at the New York Public Library for the Performing Arts (Variety)
• A memorial show for the late Howie Pyro at the Bowery Ballroom on July 23 (Official site)
• Court tosses the new Assembly district maps, though it won't impact this year's races (Gothamist)
• More on Carlina Rivera's Congressional bid (Gotham Gazette)
• Spectacular pics of the red-tailed hawklets in Tompkins Square Park (Laura Goggin Photography)
• The team behind the 11th Street Bar is reopening Mugs in Williamsburg (Greenpointers)
• The unlikely success story of Manhattan's only Burmese restaurant — Little Myanmar on Second Street (Saveur ... previously on EVG)
• Let's check out the East Village closet of Sunflower Bean's Julia Cumming (Coveteur ... previously on EVG)
• NYC's burger shops are weighing how to respond to calls to boycott the company behind Martin's Potato Rolls (Eater)
• The "intrepid playfulness" at Nudibranch on First Avenue (The New Yorker)
• Henry Winkler meets fans while dining at Katz's (Thrillist)
• A look at the new hotel Nine Orchard on the Lower East Side (Vogue)
... and a video making the rounds this weekend ... riding into Williamsburg on a J/M/Z train...

Yo WTF!? These people just came over the Williamsburg bridge on top of the train. pic.twitter.com/osEtX4a0cp

Regarding Martin’s Potato Rolls, every person with a soul should boycott anything that stinks of orange

Can't wait to check out the Lou Reed exhibit. Along with the show is release of a reel to reel tape of Lou's very first recording call "Words and Music" which he mailed to himself in 1965 to establish copyright of his songs which maybe can be described as folk-punk given the pretty obvious Bob Dylan influence. Several of these songs would make their way on to the Velvet Underground's first album in 1967. Kind of amazing to think that the genesis of modern music (when everybody was into hippie shit) was created on the LES almost 60 years ago.......

It’s got to be better than the Velvet Underground docu that came out last year. That was terribly put together.