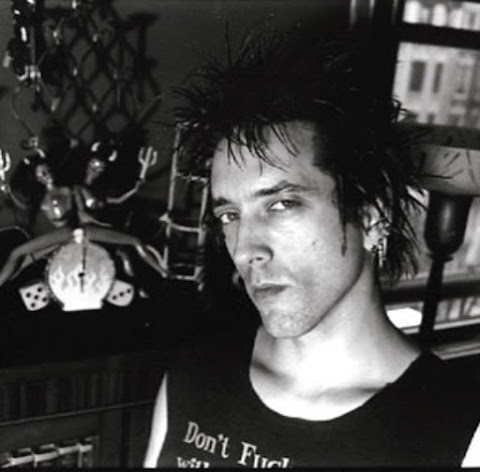 Image via @officialdgen
Howie Pyro, the prolific musician, producer and DJ, died yesterday of complications from COVID-19-related pneumonia following a liver transplant and liver disease, according to published reports. He was 61.
Rolling Stone described the Queens native as "an integral yet unassuming fixture of New York's gritty punk scene in the Seventies and Eighties, part groundbreaking artist and part observer."
Here's more from Rolling Stone's feature obituary:

As leader of the scrappy band the Blessed — all of its members were underage — he played fearlessly in front of luminaries like Joey Ramone and Debbie Harry at CBGB and Max's Kansas City in the Seventies, befriending many future stars along the way...
Born Howard Kusten on June 28, 1960, in Whitestone, Queens, he adopted the moniker Howie Pyro around the age of 15; it was the same time he relocated to New York’s epicenter of the punk movement, the Lower East Side. In 1977, Pyro formed the Blessed ... In the Eighties, he assembled the ahead-of-its-time grunge outfit the Freaks with his future wife Andrea Matthews; Pyro’s fellow Whitestone native Jesse Malin worked as the group's roadie.
In 1991, Malin, Pyro, guitarist Danny Sage, drummer Michael Wildwood, and guitarist Richard Bacchus came together to form D Generation, an attitude-heavy Noo Yawk group that mixed Seventies punk with Eighties aggression.

Malin, the East Village-based musician and bar owner, remembered his longtime friend and collaborator in an Instagram post last night:

We made our world together. From Whitestone, Queens to Madison Square Garden and every crazy, dirty little place in between. I learned so much from him. He made this planet a much better, cooler, weirder, and more beautiful place. For decades he impacted so many different kinds of people and so many different scenes all over with his style, his taste, his music, his knowledge, his Art, his fashion, his attitude, his humor, his records, his movies, his bravery, his swagger, his smile, his heart, and his compassion.

There are numerous tributes to Pyro on Instagram, including...

Pyro's family says donations can be made in his memory to the UCLA Division of Liver and Pancreas Transplantation.
Posted by Grieve at 4:00 PM