The Gem Spa signage shines brightly in this Ohio farmhouse 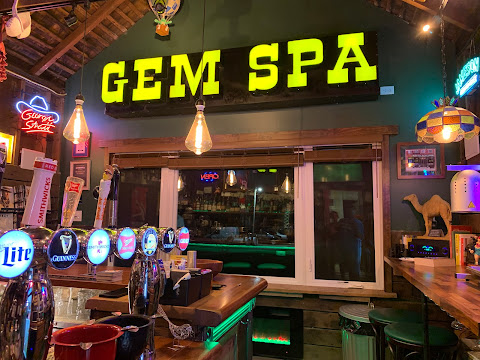 While Gem Spa has been permanently shuttered for the past two-plus years, a refurbished piece of the iconic corner shop lives on in a 19th-century farmhouse in Mount Sterling, Ohio.
Jason Sheehy, the owner of the just-mounted sign, splits his time between NYC and this town about 25 miles southwest of Columbus, Ohio, where he helps his father on the family farm.
In recent years, he became friends with Parul Patel, who ran the store on Second Avenue and St. Mark's Place that her father Ray had owned since 1986. After the shop closed (read the history here), Patel auctioned off parts of the Gem Spa to help pay for her father's care. (According to The New Yorker, he had been suffering from progressive supranuclear palsy, a disease akin to Parkinson's.)
There were several bidders, but no one matched the reserve price for the yellow Gem Spa sign from the St. Mark's Place side of the business.
"The auction ended and I texted Parul and told her I was interested," Sheehy said in an email yesterday. "We ended up settling on a price and made the deal."
Why did he want to make an investment in the sign?
"Gem Spa to me was the East Village," he said. "I used to be in Gramercy and spent most of my time in the East Village. Coming down Second Avenue — the glow of Gem Spa meant I had arrived.
"I loved the selection of magazines about obscure things. The history of the place. It just was to me, the heart and soul of the East Village," he continued. "So when the opportunity to own the sign popped up….I couldn't pass it up."
Keeping the sign company in the farmhouse are items from the now-closed O'Lunney's Times Square Pub, which shut down during the pandemic. ("I built an Irish dive bar," he said.)
Meanwhile, he continues to keep in touch with Parul.
"I was texting her [Tuesday] night," Sheehy said. "She's delighted that the sign, and her family's legacy, lives on — even if it's 500 miles away."
Posted by Grieve at 5:30 AM

to me, this new owner of the sign, seems like person who, as they currently say, leads with love

What a great story, and respect to you for giving that iconic sign a great after-life where it will be seen & enjoyed by someone who KNOWS what that sign means!

Very cool and thanks for the report - Nice to see the sign is not collecting dust somewhere and is being admired.

Thanks for putting a smile on this grumpy Griever's face!

Love this but cant help but feel that this sign should be on display somewhere right here in the East Village.

I liked it better when it was up on-2nd ave an st. Marks place♥️♥️♥️🥊

Sometimes a sign is just a sign. Pretty telling that nobody wanted it in the first place. For me the only significance is that that location is featured on the back cover photograph of the NY Dolls first album. The Fillmore East was far more important historically, to say nothing of Betsy Johnson's place, Azuma, Bowl and Board, Free Being, the Dom, Club 82 to name a few. But good for the buyer if that is his thing.

Last time I was in Maine (2019) I stumbled upon this great store. Turns out it's owned by the previous owner of Bowl and Board! Finally heading back up next week. Hoping they're still open.

I'm happy to see the sign in its new home where it's loved and appreciated.

I'm so glad the sign ended up with someone who seems to genuinely appreciate it.

The greedyasfuck owners of that property preferred an EMPTY store rather than work out a plan that would have enabled Gem Spas to stay there.

Ray's tough as nails daughter Parul really TRIED to keep her dad's legacy alive, but she was hit by several things within a short period of time, including: the magazine and newspaper distributor attempting to cheat her, leading her to refuse to carry their publications; NYPD setting up her employee who unknowingly sold cigarettes to an undercover "minor" resulting in their losing their cigarette license for a long time; the "covid" scare that led gov Cuomo to force small businesses to close while he allowed big chains and supermarkets to remain open.

The resulting loss of income caused Parul to fall behind on rent, but the fucking landlord didn't care. On top of all of this, she was caring for her dad, who was suffering from palsy.

All that's left now are the memories of a vibrant active time in our neighborhood where you could get snacks and periodicals 24hrs a day, with great eateries and entertainment venues open all night, where you could run into friends, old and new, at any hour of the day. Now, the only "nightlife" here consists of hipster dipshits, yuppie assholes and Eurotrash boozing it up at "trendy" bars.

We were grateful that Ray agreed to sell The SHADOW there, despite constant threats from pigglies at the "fighting ninth" precinct nearby. For many years, Gem Spas was the biggest seller of SHADOWs.

Wow and I thought I had a piece of history from the EV, I still have a free drink chip from Side Walk Cafe.

Do you remember all of those people on this blog who said that if you don’t like it here, go back to Ohio? Well, the Gem Spa sign did.

Exactly. It found better housing and appreciation in Ohio.