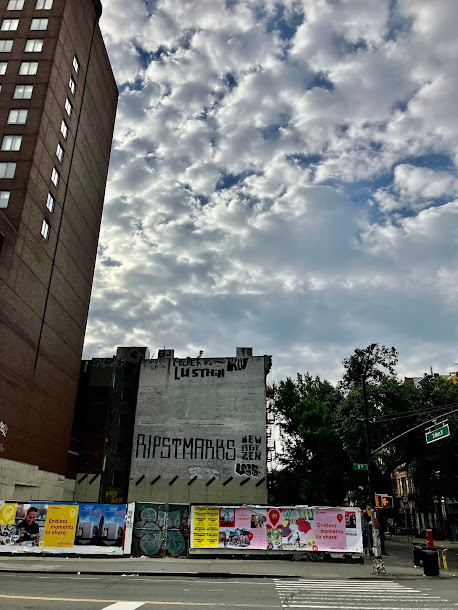 The 9-floor office building for the northeast corner of Third Avenue and St. Mark's Place has new life after the developer received a $70-million loan.
As The Real Deal first reported, Parkview Financial is providing the loan for the refinancing and construction to developer Real Estate Equities Corp. (REEC) for the 61,000-square-foot building at 1 St. Marks Place.
Per TRD, REEC plans on 53,000 square feet of office space and some 7,700 square feet for retail.
Parkview CEO Paul Rahimian said in a statement that 1 St. Mark's Place could be in "high demand from the growing number of tech companies in the area."
Here's more from TRD on the project, slated for a summer 2024 completion, and the office-market outlook:

As of 2019, REEC was shooting for top-dollar rents at the boutique office building, planning to ask for around $150 per square foot. It's not clear what the developer will be seeking when the project finally comes to fruition. The office market has been decimated in the wake of the pandemic. A recent analysis predicted that by 2029, the city's office stock will drop in value by 28 percent, or roughly $49 billion, due to lease revenue falling and remote work rising further.

In any event, expect work to ramp up again after months of inactivity. Last October, workers removed the barriers around the work site... allowing pedestrians to use the sidewalks again — for the first time since the barricades arrived in June 2020.

A smaller building, and stacks of wheatpaste ads

As you may recall, a 10-story office building had been in the works here. In October 2020, the City Council's Zoning Subcommittee voted down REEC's application to transfer air rights from the landmarked 4 St. Marks Place to the new building across the street.
With the air-rights transfer, REEC would have been allowed to build 8,386 square feet larger than the current zoning allows.
REEC picked up the 99-year leasehold for the corner properties for nearly $150 million in November 2017. The previous assemblage, which included retail tenants such as Korilla BBQ, the Continental and McDonald's, was demolished in 2019.
For the past year-plus, this gateway to the East Village — with the "RIP St. Marks" greeting on the west-facing wall at No. 5 — has served as prime wheatpaste ad space... 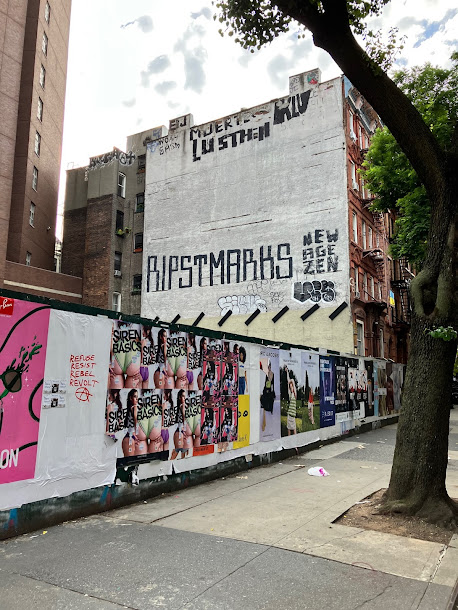 ... and beware of falling wheatpaste ads! (photo by Steven)... 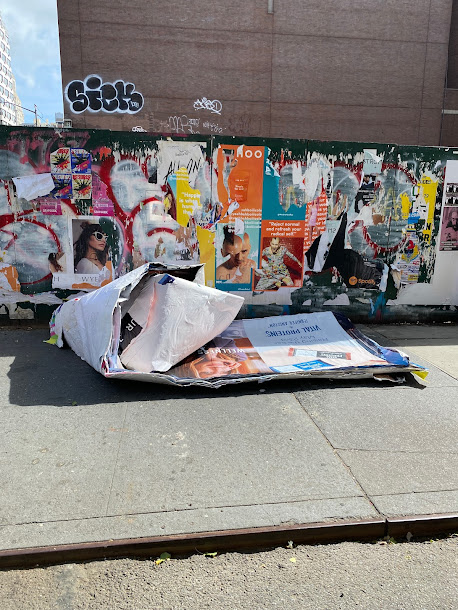 Office space? Really? I thought we had a glut of that going unused in many other Manhattan neighborhoods. Would it kill someone to create some affordable housing?

Perfectly logical , what could go wrong.

Agree with anon@5:20am. Is there really a need for more offices? The city government is increasingly out of touch with residents and catering mainly to big real estate. I know that's nothing new. It seems to be worsening. Given that giant project about to take place around Penn Station (PENN15, lol), really, who needs this? With rising inflation, will the banks have the ability to continue to provide loans at these low interest rates that so many seem to think will continue forever as the new norm?

This is the dumbest thing that could go on this corner. We need housing for the unhoused. Plenty of people in need in this neighborhood. Is anyone desperately in need of office space? No. This city is so backwards, I don't get it.

What is an "office building" anyways?

People ask why more office space and why no affordable housing? Predatory capitalism! The real estate industry is the single largest source of political donations in NY state. As to affordable houseing, be aware of "Gov. Kathy Hochul’s proposed Affordable Neighborhoods for New Yorkers program, a rebrand of the expiring 421-a tax break." Which gets the re biz huge tax breaks but no real follow through on affordable housing, supported by the REBNY.
From the Real Estate Board of NY wiki: "The group also backs political candidates deemed friendly to real estate companies, "Few industries gave more — and frequently in large amounts — than real estate."[5] Thanks to the enactment of the 1994 New York state Limited liability company (LLC) law millions of dollars are donated to Albany and local politicians "from luxury residential buildings, office towers and parking garages controlled by some of New York City’s biggest tycoons." All owned by "LLCs, a structure shielded from New York’s tight restrictions on corporate campaign donations." Real estate developers "can give virtually unlimited sums each campaign season," privately and through the REBNY. "By influencing state elections, developers have undermined rent stabilization and preserved a key tax break that saves them far more money than they spend on political campaigns. The value of that subsidy, which is known as 421-a, has soared from $73 million in 1986 to an estimated $1.4 billion this year [2016]. In return for the tax benefit, owners are supposed to limit rent increases and set aside a portion of units in high-demand neighborhoods for below-market rents — though they often don’t fulfill their commitments."[6] REBNY President James Whelan in January 2022 "indicated support for Gov. Kathy Hochul’s proposed Affordable Neighborhoods for New Yorkers program, a rebrand of the expiring 421-a tax break."[7]

"REBNY members gave a tenth of all N.Y. campaign money," in 2015 "which represents only some of the political spending by New York’s real estate industry." Michael McKee, treasurer of Tenants PAC, said he "was concerned that state leaders would be more likely to heed REBNY’s positions than his own as a result of the contribution levels. (Tenants PAC and McKee contributed $61,565 to 2014 candidates.) “This is legalized bribery,” he said. “They’re quite used to buying what they want and getting it, and the legislature—both houses—has proven to be quite willing to give it to them.”"

@2:22pm: Thank you for those quotes. PREDATORY is the only word that applies, esp. given the complete failure to produce affordable housing. The only thing that gets built is "luxury" housing. But nobody in power is willing to do what it takes to make affordable housing a true priority.

The fact that REBNY members gave 10% of ALL political donations is telling. What is that, other than (as quoted) "legalized bribery"?? This is how Russia functions, no?

More telling is the fact that tenant groups don't stand a chance, since the table is tilted so far in the developers' direction.

And, IMO, the last thing NYC needs is another 421a tax abatement or tax break in ANY FORM or name, b/c that's just NY State saying to the developers: You scratch my back, I'll scratch yours. Otherwise known as "legalized bribery."

I live in a small co-op building, and I can tell you that OUR real estate taxes only continue to go up, up, up. We are regular working people, and it's always a battle to keep up with new and often very arbitrary rules & laws in this city.

What do you mean by "affordable'? Section 8? NYCHA? What are the income limits? Who pays for it?

It’s amazing NYU didn’t buy this property. They have been buying up the neighborhood for decades. They don’t pay property tax, even though they are a private institution. They are not a good neighbor. They are also not a good landlord. Just ask any storefront owner that has a store in an NYU owned property. Very greedy and very difficult to negotiate with.

Let’s guess what the retail storefront will house: alcohol, noodle, or smoke shop?

@6:17pm: Then be very grateful NYU did NOT buy up this location!!

Anything but that. God I wish I was young enough to do hard drugs and rob people like I did in the early 90s. I’d go on a rampage. This neighborhood was great back in the bad old days. Sucks now.