Best wishes to John Flansburgh of They Might Be Giants 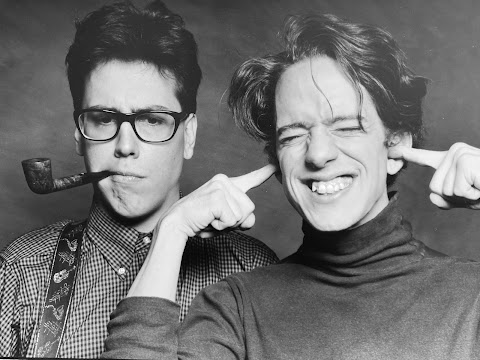 ICYMI... John Flansburgh (above left), one-half of They Might Be Giants along with John Linnell, was seriously injured in a car crash early Thursday morning coming home from a show at the Bowery Ballroom.
According to the Daily News: "Flansburgh, 62, was taking a car service back to his Upper East Side home after the band had a show at the Bowery Ballroom at about 12:45 a.m. Thursday when the Ford he was riding in was T-Boned by a 2016 Honda near the corner of Park Avenue and East 102nd Street."
Flansburgh and the 32-year-old livery driver were taken to Cornell Hospital. The guitarist broke seven ribs. (The driver's condition is not known.)
Per reports, 26-year-old Bronx resident William Mota was charged with drunk driving, resisting arrest and refusing to take a Breathalyzer test. Police told the Associated Press that Mota ran a red light, jumped a curb and plowed into the gate of a housing complex, hitting two cars along the way.
Flansburgh wrote about the collision in a lengthy Instagram post...

The collision occured after the first night of TMBG's pandemic-delayed tour celebrating the 30th anniversary of Flood (a great record BTW). The shows will likely start up again later this summer.
While Flansburgh diffused the situation with some humor, Streetsblog pointed out that through June 5, "there have been 41,772 reported crashes (roughly 270 per day), injuring 1,542 cyclists, 3,495 pedestrians and 13,644 motorists" in NYC.
They Might Be Giants were regulars in the East Village in the 1980s... you can read our interview with the band's other John, John Linnell, right here.
And while were here...
Posted by Grieve at 8:45 AM

Best wishes..Broken Ribs aint no Picnic but I guess it could have been worse.

Multiple rib fractures put him at a severe risk of developing pneumonia, mainly from the inability to take deep breaths. Rib fractures ain’t no joke if you’re 60+ years old. Nevertheless, wishing him a speedy recovery.